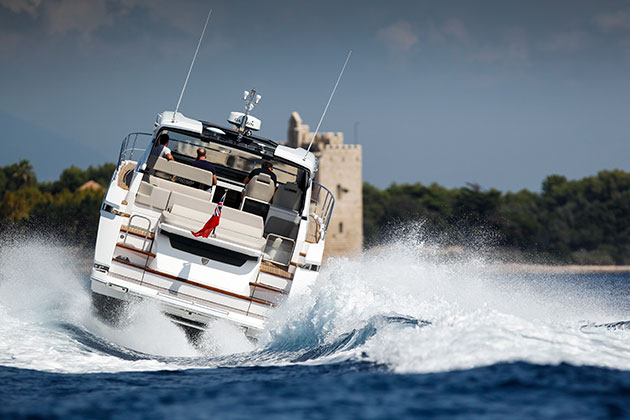 The Fairline Targa 43 Open could be the boat that defines this era of Fairline Yachts. The question is, does it live up to the hype?

We are snaking through a minefield of waterborne exotica in search of the perfect empty patch of blue for some aerial footage. That, however, is a tall order when the location is the anchorage between the Lérins Islands off Cannes at the end of August.

There are so many boats jostling for anchoring space they have effectively formed a chain of luxurious stepping stones that you could walk between the islands on.

We find a handkerchief-sized dollop of turquoise water over white sand, which should look tasty from the drone, and hover a couple of feet off the bow of an Italian-flagged Sunseeker Camargue.

The owner marches down the side deck to, I assume, tell us to keep our anchor away from his but in fact he enquires as to the make and model of the boat we’re on. “It’s a Fairline Targa 43,” our skipper replies from the foredeck. Our friend sticks up his thumb and smiles: “Nice!”

He’s right, it is nice, and has been drawing admiring glances from the second we departed Port de La Napoule. This is the 43’s first outing and this – hull number one – was shipped from Ipswich the previous day before having its IPS600 pods plugged in and its bottom dipped into the balmy waters of the Côte d’Azur.

Like the Targa 63 GTO, launched this time last year, the exterior styling is by Alberto Mancini, so it’s no mistake that the 43 looks an awful lot like the flagship has been put through a hot wash.

It shares the same distinctive window design and sweeping roofline, which disguises a truly enormous sliding roof. When it’s open the aperture is staggeringly big, yet it folds back very neatly into a cassette within the radar arch.

A particularly neat Mancini touch is the pair of ‘wings’ that stop the bunched up fabric from peeping over the top of the roofline and disturbing the profile. Read the full report in MBY November 2018.