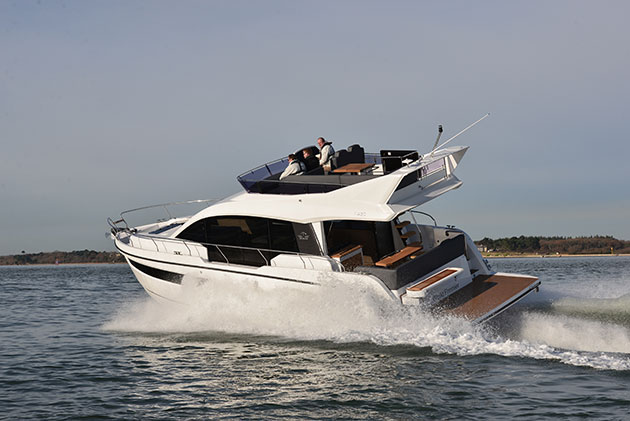 I’m standing in a Boston Whaler 235 Conquest that drifts on the oily calm water of the Solent, smiling wryly at the crystal clear blue skies above me.

The source of my amusement is the conversation just three days earlier with Sealine dealer Chris Manners from TBS Boats during which we nearly postponed this test due to forecasts of high winds and heavy rain – forecasts from the Met Office, an organisation that confidently tells us what the weather will be doing a decade and more from now…

Only the third all-new model launched by Hanse since the German company took over the ailing British brand, the 430 slots neatly between the existing 330 and 530.

It was introduced to us in September 2017 at the Southampton Boat Show as the C430, a coupé with an enclosed deck saloon but no flybridge. British showgoers then had to wait another whole year before the flybridge version made its UK debut at Southampton 2018.

On the water it’s an imposing looking boat. Designed by Bill Dixon, as are all Hanse Sealines, the crisp all-white colour scheme of our test boat (painted hull colours are an option) with accents picked out in black, has more than a hint of storm trooper about it.

I’d hesitate to use the word elegant, but it has real presence and purpose. And although the coupé is sleeker,  I actually prefer the profile of the flybridge version, the additional height of the superstructure helping offset the tall topsides of the hull.

It sweeps past, nose held high, sizeable wash emanating from the waterline beneath the windscreen, before banking into a gentle turn ready for another run past.

Read the full report in the March 2019 edition of MBY…