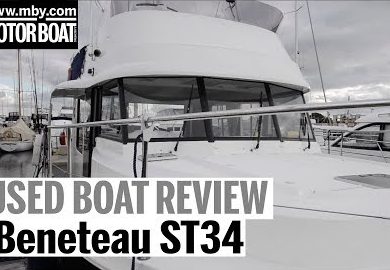 I was looking for an eight-metre sportscruiser a couple of years ago, and one model blew me away with its incredibly spacious and immensely practical layout. The search quickly morphed into a hunt for simply the best Jeanneau 805 Leader I could find.

It’s been a while since a used boat had such a profound effect on me, but 10 minutes aboard the Bénéteau Swift Trawler you see on these pages was all it took to realise that I’d found another gem that not only defied any reasonable expectation of space on board, but did so in an incredibly practical and useable manner.

Launched in 2009, the 34 wasn’t Beneteau’s first Swift Trawler – a new genre of boat that combined the style, comfort and practicality of a trawler yacht with the speed and contemporary interior design of a flybridge cruiser. The Swift Trawler 42 launched in 2003 took that honour, followed by the Swift Trawler 52 in 2007. The smaller Swift Trawler 34 was a move to popularise the formula.

The result manages to wear the lines of its bigger brothers in a way that looks authentic rather than twee. With its porthole hull windows, near vertical windscreen, mast and a deeply bulwarked side deck protected by a flybridge overhang, it may sport less physical inches, but it is still every inch the little ship.

And those looks are not for effect, they speak of immense practicality that begins with sheer accessibility. The Swift Trawler 34 has asymmetric side decks that favour the starboard side, which has that bulwarked deck. A gate in the topsides mean that it’s almost the same height as the pontoon, making for a very gentle step aboard.

Once there, you have options. Head aft along the side deck to the cockpit, head forward up two chunky steps to a flat foredeck or head straight on, where a large sliding side door allows you to step directly into the main deck internal helm position.