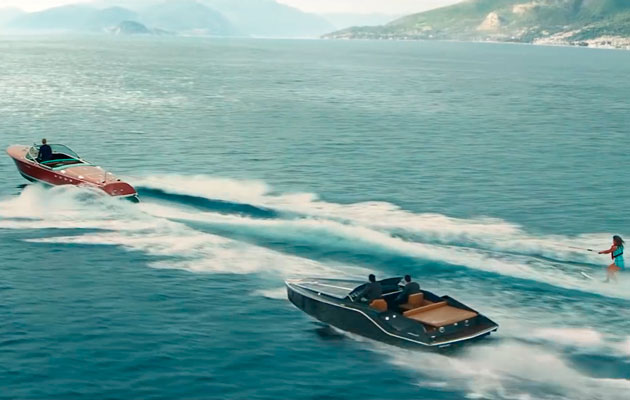 The newest James Bond movie Spectre comes out next month but for fans who can’t wait that long, Heineken has released a slice of 007 action as part of their latest ad campaign ‘The Chase’.

In this tongue-in-cheek advert, Daniel Craig jumps into a Riva-esque tender and is pursued by a gang of bearded villains driving two identical Frauscher Mirage powerboats.

The comic twist is added by a female water-skier who is unwittingly towed along for the journey, disrupting a wedding, stealing Odd Job’s hat and (you guessed it) picking up a tray of Heineken in the process.

After she helps to foil his pursuers Bond simply raises an eyebrow and suggests “Lunch?”

If rumours are to be believed, this is a taste of the kind of high-speed on-the-water action we can expect from director Sam Mendes’ upcoming blockbuster, which is released in the UK on October 26.

As well as Daniel Craig, the cast of Spectre includes Christoph Waltz, Ben Whishaw and Lea Seydoux, but we’re more interested to find out whether the Frauscher Mirage will be making another appearance. Here’s hoping…