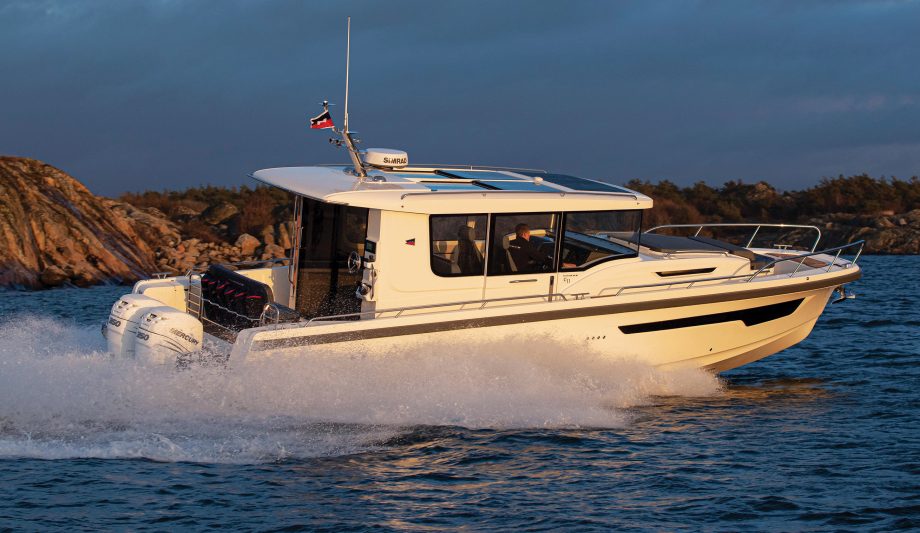 We did a full sea trial of the open Nimbus T11 back in March, but this C11 sister model, launched at the 2020 Düsseldorf boat show, also merits a closer look

That’s because the designers have worked hard to make it feel like a separate model rather than just a Nimbus T11 with a lid on it. It starts with a redesigned transom that replaces the T11’s convertible aft bench/sunpad with a dedicated fender rack and a flip-up bench that frees up the cockpit for fishing. There’s even an optional outdoor helm station.

The pilothouse is another fine piece of design with deep wraparound windows, very thin mullions, oversized side doors and four glass skylights overhead. It makes for an exceptionally light, well-ventilated space that stays warm in winter but avoids feeling stuffy in summer. There’s even a full set of front and sidescreen wipers concealed under the wheelhouse overhangs.

Below decks it follows a similar layout to the T11 but whereas the open boat has an outdoor galley, the C11 has an indoor galley situated in the lower lobby area. The forward double berth, private mid-cabin and separate heads compartment remain unchanged.

As with the T11, there’s a choice of either Mercury petrol outboard engines and a large cockpit lazarette or Volvo inboard diesels up to twin 440hp D6s. Both should comfortably give top speeds of more than 40 knots thanks to a slippery stepped hull with a narrow entry and heavily flared bow. As an all-year-round commuter that can lend its hand to fishing, cruising or entertaining, it’s an impressively quick, practical and very versatile tool.

Update: The Nimbus C11 will be on display at the 2021 Southampton Boat Show.