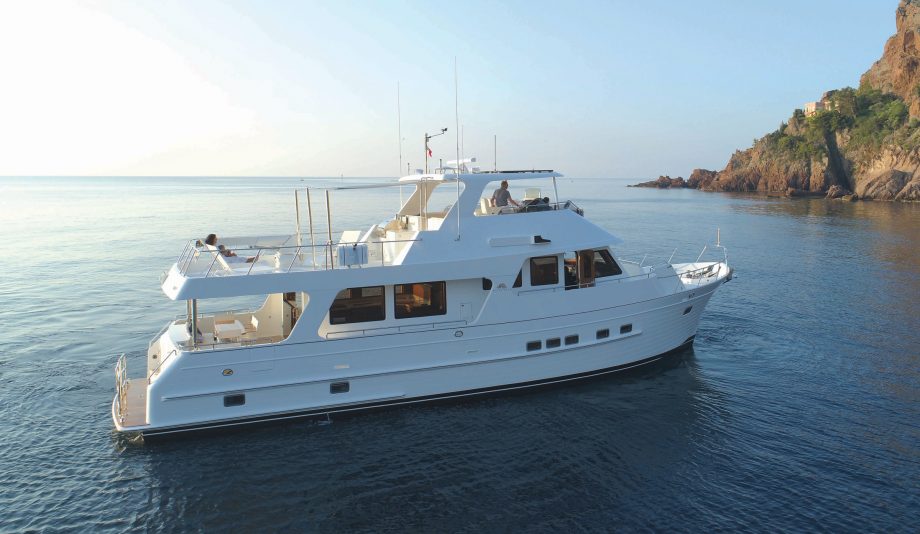 It’s hard to know what’s the most impressive aspect of the Outer Reef 640 – the enormous galley, the vast flybridge or the bank vault of an engineroom. The latter probably edges it, not just because it’s large enough to walk around but because it has been designed with the integrity of a nuclear power station.

Every pipe, hose and valve is neatly labelled, multiple Racor fuel filters and twin generators give built-in redundancy, and the Trac stabilisers can run off either engine.

Throw in a 1,400-mile range and a Class A semi-displacement hull and you can see why Outer Reef owners have the confidence to cruise where others fear to tread.

The nice thing about the 640 is that it’s also a lovely place to spend time when pottering around the Med. All Outer Reefs can be customised and the owner of this boat asked for the largest galley we’ve ever seen on a 65ft boat, with enough cooling space to feed an army and a work surface you could land a plane on.

Down below the full-beam master suite is supplemented by a forward VIP, a twin guest cabin and a crew cabin. All have beautifully lit, aired and cedar-lined wardrobes.

As a go-anywhere liveaboard it’s hard to think of anything under 70ft that could live with it.