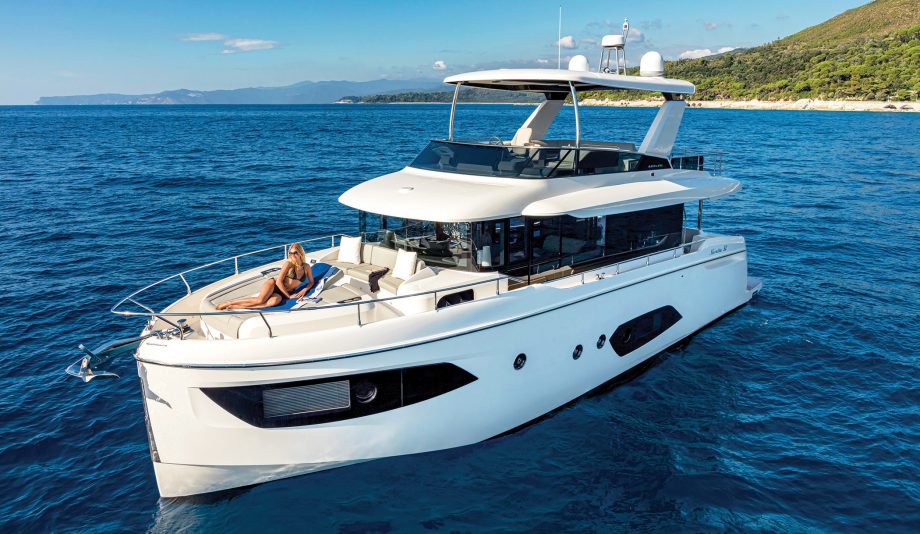 It still uses the original 52ft hull from 2015 but new mould plugs allow for larger, asymmetric side windows. Look closely and you’ll see that the actual window area isn’t quite as big as the smoked glass inserts suggest but they do make space for opening round ports alongside the larger bonded panes.

Other useful exterior tweaks include a boarding gate on the starboard side for easier access from a finger pontoon and a much larger hardtop which, thanks to reversing the angle of the radar arch supports, now stretches further aft to cover the flybridge dinette as well as the helm. Other features like the wide covered side decks, transom-mounted wet bar, huge hydraulic bathing platform and cockpit privacy blind, remain unchanged.

Moving inside the Absolute Navetta 52, the aft window in the galley now drops down quickly and silently to create a neat little bar out into the cockpit while the storage unit to starboard is deeper and easier to access.

In fact, the layout of the main deck is hard to fault. It’s an exceptionally light, roomy and beautifully finished space. Details like the leather-wrapped handrails recessed into the deckhead to form part of a lighting feature are as elegant as they are practical.

Down below, the headroom in all three cabins is exceptional, while the clever offset forward VIP enjoys far more floor space and better views out than is the norm for this size of boat.

Twin IPS600 or 650 pod drives give a modest top speed of around 20-22 knots, but the Absolute Navetta range has always been more about comfortable, relaxed cruising than performance. The only wonder is that they still haven’t caught on in the UK yet.