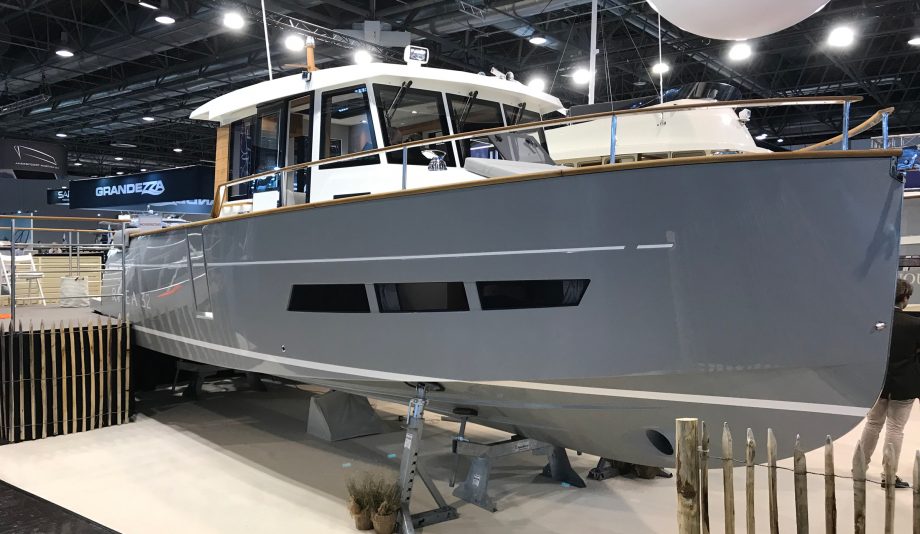 We’re big fans of the French-built range of Rhea boats. They’re as sturdy as they are charming with a style and character that sets them apart from mass-produced rivals

Don’t be deceived by those traditional looks though, this all-new Rhea 32 is powered by state of the art 350hp outboard engines giving it a hilarious top speed of an estimated 45-50 knots. If it lives up to that claim, this could be the most unlikely performance boat of the year!

Even if you’re not that fussed by its pace, there is still lots to like about the Rhea 32. With its deep bulwarks, walkaround decks, teak grab rails and pontoon boarding gates this is an exceptionally safe and easy boat to move around.

It’s also ideally suited for cruising one-handed with sliding doors on both sides of the wheelhouse allowing the skipper to pop out and deal with lines and fenders. Other practical touches include masses of storage under the cockpit floor, cleats that fold flush to the cap rail when not in use and a flat roof for carrying paddleboards and kayaks.

Inside the wheelhouse, the dinette has a reversible backrest and slides right up to the helm to create more space around the table when at anchor. The helm enjoys good vision all round compromised only by relatively thick mullions between the triple section windscreen.

The accommodation is all open-plan with a big double bed forward enjoying lots of light and headroom thanks to eye-level windows and a skylight. The second double is more of a crawl-in space under the wheelhouse with limited headroom but a good sized bed that doesn’t feel too claustrophobic. Both share a wet room with a pull out showerhead.