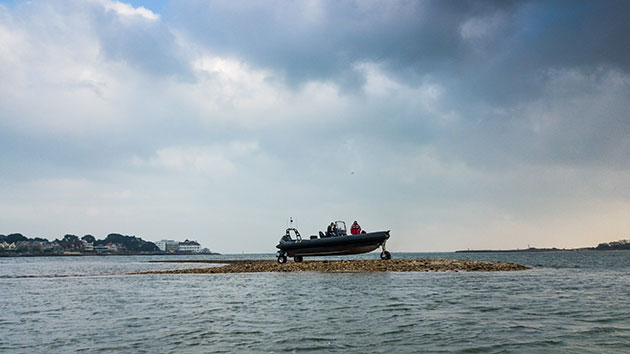 The Sealegs 9.0m Hydrasol allows you to explore the parts that other craft can’t reach, as we discover on a very unusual tour of Poole Harbour

Once upon a time, I broke a world record. The year was 2005 and Sealegs had just launched its first craft, a fairly basic 5.6m aluminium RIB powered by a 90hp outboard engine. It was unexceptional in every way except for one – the three folding wheels that allowed it to crawl in and out of the water under its own steam.

As far as the Guinness Book of Records was concerned this made it eligible to challenge the cross-Channel record for amphibious vehicles, held at the time by Sir Richard Branson in a Gibbs Aquada car.

Sealegs’ founder Maurice Bryham, the then UK importer Nick Fox and I duly drove down the slipway at Dover one still September morning, nipped across the Channel and up the beach at Sangatte 43 minutes later, smashing the record by almost an hour.

It was a very effective piece of PR that brilliantly demonstrated the potential of this innovative little craft, but it also showed up the limitations of that early example. The weight of the petrol generator, wheels and hydraulics affected the RIB’s handling, the hull slammed in any kind of sea and with only two driven wheels it soon got bogged down in soft sand.

In fact, on leaving the beach in France we got stuck on a sand bank, were swamped by the incoming waves and only narrowly avoided disaster by jumping overboard and bailing frantically with a child’s plastic bucket.

Thirteen years later and things have progressed a lot. Sealegs has sold more than 1,300 boats, the range now spans everything from a 6.1m open RIB to an 8.5m alloy cabin boat, and the amphibious technology has been refined to make it more user friendly, more robust and more effective.

The 9.0m Hydrasol RIB I’m testing today isn’t just the latest and largest Sealegs to date, it’s also the most sophisticated. It features a brand new deep-vee hull with a 23˚ deadrise and a 300hp Yamaha engine and all three of the wheels are now driven  with a locking differential that should help it find traction in even the slipperiest of conditions.

Read the full feature in the March 2019 edition of MBY…