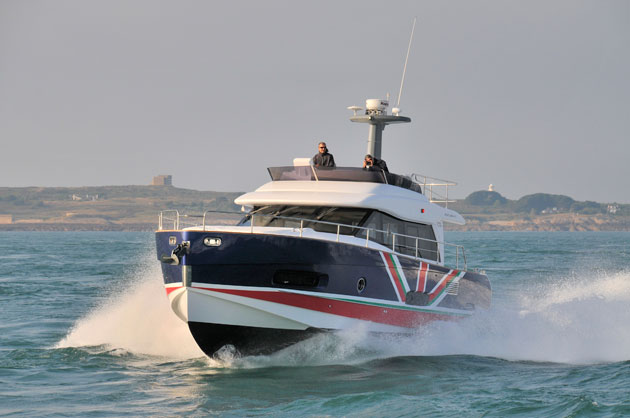 It’s a real novelty to be given a boat to test for two days, especially one which we’ve already trialled 18 months ago. But why would we want to revisit the Azimut Magellano 43 when we’ve already tested this very boat out in Italy?

Well, Azimut’s recent adverts have been proclaiming that the Magellano is “the best boat for British people”. Which doubtless means a vessel that can easily cope with the challenges that our blustery and changeable UK waters often confront us with.

And what better way to test that claim than by taking the smallest of Azimut’s Magellano range across the English Channel and back.

Of course, at their most agreeable, channel crossings can be serene affairs. So to make life as difficult as possible we insisted on traversing the infamous Alderney race in both directions, and cutting the corners around Cap de la Hague and the Needles as close as possible, in order to amplify any wind-over-tide effect.

Those two attractions did produce some mildly turbulent seas, but nothing particularly challenging. However, luck was with us because just two miles out of St Helier on the return trip, where the land pokes out the furthest at Noirmont Point, the F4 to F5 breeze and the opposing tide cooperated to whip the seas into a short lived but perfectly formed test bed for the Azimut Magellano 43.

What stood out most was the Bill Dixon designed hull form’s absolute refusal to crash or bang. For sure, the unusual hull moves around as much as any similarly sized planing boat, but a muted thud is the most it subjects its occupants to.

It was also noticeable just how quiet the Magellano 43 sounded down below, even driving through the worst conditions. The heavily curved hull form is inherently a very strong one, but Azimut’s glassfibre laminates also appear exceptionally sturdy. These combine to produce a boat that didn’t produce a single squeak during my six hours onboard.

There is much more to tell too, so look out for the full story of our two-way Channel crossing in the January 2014 issue of MBY.