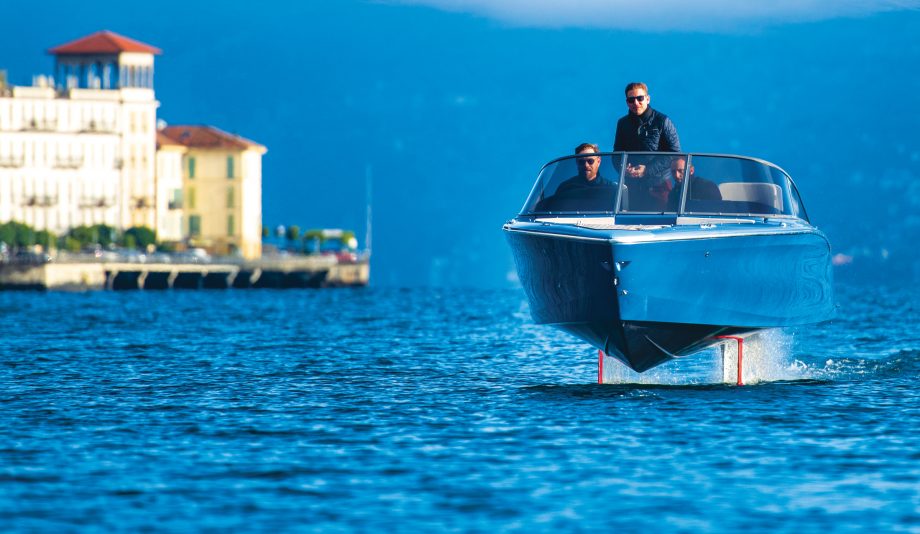 For something that looks as cool as the Candela Seven, it’s hard to believe that the starting point was a mathematical equation. But that’s exactly how it came about.

In 2014 a crack team of boffins with experience ranging from fighter jet control technicians to America’s Cup hydrodynamicists, assembled in Stockholm to try and solve a seemingly intractable problem – how to create an all-electric boat with the range and performance to match a petrol one.

The fact is that a 25ft sportsboat uses 15 times as much fuel as a family car, yet pound for pound even the most advanced battery holds 15 times less energy than petrol. To resolve these two conflicting issues, they had to find a way to drastically reduce the energy consumption of their proposed boat.

The mathematical equation they devised looks as dense as a block of concrete but it worked and the result is the Candela Seven – a lightweight carbon-fibre sportsboat that uses active foils and computer-aided flying controls to skim above the waves.

Thanks to their efforts, this next generation foiling sportsboat uses a claimed 75% less energy than a conventional GRP planing sportsboat. To put that in perspective, the Candela Seven requires just 28hp to keep it flying along at 20 knots.

The foiling system accounts for a big part of that saving as it halves the hydrodynamic drag of a normal planing hull. The ultralight carbon fibre construction is responsible for another big chunk of it – even with its 240kg BMW i3 battery pack in situ, the Candela Seven weighs just 1,300kg or roughly half that of a Chris-Craft 27 Corsair.

The final piece of the jigsaw is the super efficient 55kW electric motor, which not only delivers maximum torque at zero rpm but also generates far less waste heat than an equivalent fossil-fuel engine.

To read our full report on the Candela Seven, pick up the July 2020 edition of Motor Boat & Yachting, which is out now.