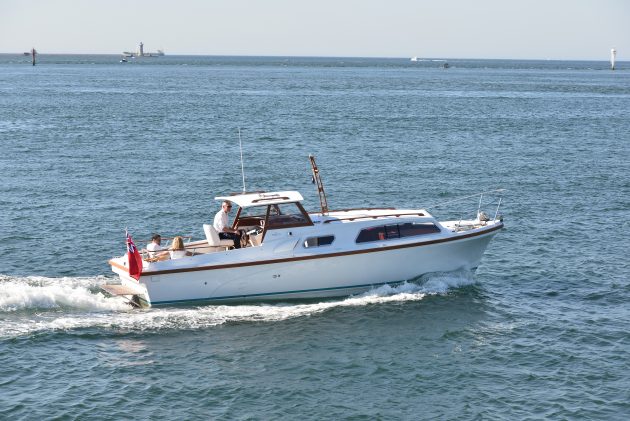 Princess Yachts celebrated its half century with a stunning restoration of an original Project 31. Nick Burnham shows you around this exquisite motor boat

Last year saw the launch of Project 31 by Princess Yachts to mark the yard’s 50th anniversary and we have managed to get on board for a spin.

As opposed to a big birthday cake or a fly past by the Red Arrows, Princess had the idea to take one of its original 31-footers and restore it to a modern standard, in keeping with the original style of the boat.

The yard found an unloved 31 in the Channel Islands and then set about restoring her to former glory using its own craftsmen. Many of the  people working on the refit were half the age of the boat!

Director of design Sarah Verey and her team  restored the interior faithfully and beautifully, using a mix of modern materials and classic design to ensure Project 31 remained in keeping with her 60s heritage.

Though the best efforts were made to restore the original Ford engine it simply wasn’t salvageable so Princess replaced it with a new, reliable Volvo Penta D3 170hp good for a top speed of 16 knots.

But this is not a boat about speed, it’s about enjoying time on the water on a thing of utter beauty. The detailing is wonderful, the retro touches exquisite and it’s a boat that pulls at nostalgic heartstrings like nothing else.

As a celebration of the yard’s progress in 50 years it’s timeless and acts as a stark reminder of where this company has come from. When Project 31 was launched at Cannes it nestled in next to the yard’s newest model, a 30 metre superyacht.

Read the full feature about Project 31 in the November 2016 issue of Motor Boat & Yachting.

Princess Yachts is due to restore its first ever model, the Project 31, as part of the company’s 50th anniversary