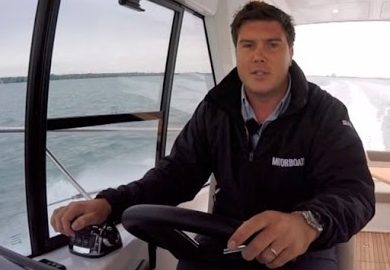 We’ve been comparing three of the most popular 33ft sportscruisers on the market from Bavaria, Galeon and Elan

For the October edition of Motor Boat & Yachting, we set out to test some of the most popular 33ft sportscruisers – a segment of the market that is becoming increasingly competitive.

With the latest models from Bavaria, Galeon and Elan Yachts all squaring up, this triple test was set to be a very close-fought battle.

First up, Jack Haines drives the brand new Bavaria Sport 330 (above), which is the fastest of the bunch (with a top speed of 34.8 knots from its 220hp Volvo Penta D3 sterndrives) and also the cheapest.

Next up, Nick Burnham reports on the Galeon 325 HTS – the largest of the three models by a couple of inches and sporting a very smart interior.

Finally, Jack delivers his verdict on the Elan Power 30, which has the kind of build quality you’d expect from a sailboat manufacturer and the kind of below decks space that you wouldn’t.

To read our full 14-page comparison feature, pick up the October edition of Motor Boat & Yachting (out September 3).