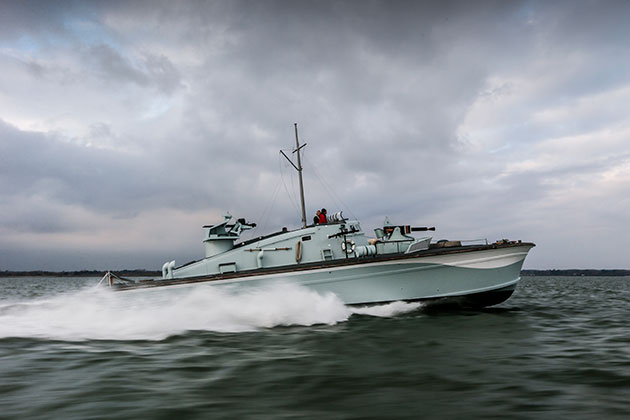 When German E-Boats began to run amok in English waters early in the Second World War, the Navy responded with a typically British solution

By the summer of 1940 Britain was under siege. Its army hastily evacuated from Dunkirk, its cities under attack from the Luftwaffe and its navy struggling to keep supply lines open. It seemed only a matter of time before a full scale invasion took place.

Were it not for the skill of the RAF pilots and the technical superiority of the Spitfires they flew during the summer-long Battle of Britain, things could have turned out very differently.

But while the airforce retained its dominance of the skies, all was not well at sea. Cut off from occupied Europe, the convoys on which the country now depended were suffering heavy losses.

German E-Boats were running amok in the Channel, creeping up on shipping, unleashing their torpedoes then disappearing into the night like wolves preying on defenceless sheep.

Nothing stops the Motor Boat & Yachting team from testing a boat, not even Christmas! Watch the festive boat tests

Even when the E-Boats were spotted, conventional Navy craft were too slow to reach the scene before they melted away. What Britain needed was something fast, light and agile — a Spitfire of the seas.

Hubert Scott-Paine, a former powerboat racer and founder of the British Powerboat Company (BPB), was convinced he had the answer in the shape of a 70ft planing gun boat.

Built out of wood and powered by triple 1,250hp petrol engines, giving it a top speed of more than 40 knots, it would be able intercept and sink marauding E-Boats far more effectively than cumbersome steel ships.

The Admiralty bought into the idea and in November 1940 put in an initial order for 24 of these Motor Gun Boats (MGB) from BPB in January 1941.

Read the full feature in the February 2019 edition of MBY.