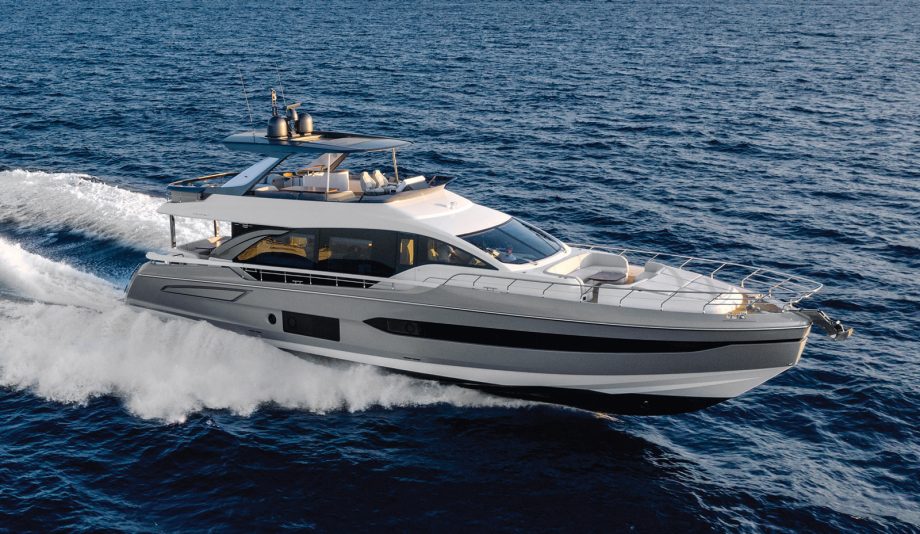 Azimut has wheeled out the big guns to overhaul its flybridge range and the Azimut 78 is the first to be launched, getting its debut at Cannes 2019.

It marks new territory outside, inside and within the engineroom where IPS (a triple installation, no less) is being fitted to an Azimut flybridge for the first time.

Though Achille Salvagni has created his trademark curvaceous Azimut interiors before, it’s the first time one has been teamed with an Alberto Mancini exterior and in the flesh the two combine well.

Mancini has removed the fussiness that was creeping into previous designs yet the substantial flybridge overhang and upright snout mark it out clearly as an Azimut.

The deck spaces feel enormous, especially the flybridge, which effortlessly covers the bases of lounging, dining and sunbathing.

Using IPS has allowed for an interesting internal layout whereby the crew space is contained in the port bow section, portioned off from the angled VIP cabin by a curved bulkhead.

The obvious benefit is a brighter and more spacious crew area but this layout also leaves the transom space clear for a vast water toy storage area accessed via a hydraulic aft door.

The four cabins, including a splendid full beam master suite, are accessed via a separate staircase that leads off to starboard directly from the main saloon.

The Italian yard has clearly invested a significant amount in the Azimut 78 and – sea trial pending – it appears to have paid off.