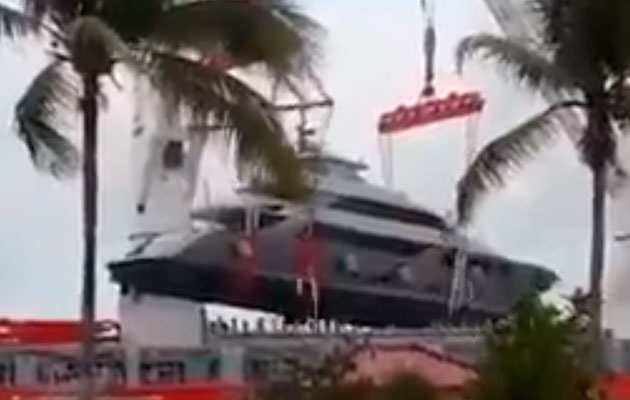 Panama is no stranger to superyachts, with many large vessels passing through the Latin American country every year, but this week a Tecnomar vessel was involved in a particularly nasty incident.

The 131ft superyacht was being hoisted on a container vessel in the port of Colon, while an interested onlooker filmed the lift from afar.

However, the seemingly routine procedure took a turn for the worse when the lifting straps around the large vessel broke, sending the superyacht plummeting onto the deck as the footage above shows.

The resulting thud, accompanied by plenty of shouting in Spanish, is enough to make any superyacht owner wince and then swifty check their insurance.

The short clip was uploaded to Facebook by local publication Mi Diario on Saturday (May 23) and has since been viewed more than 190,000 times.

The vessel in question is believed to be Low Profile, a 2014 Tecnomar Nadara 40 with five cabins and a top speed of 26 knots.