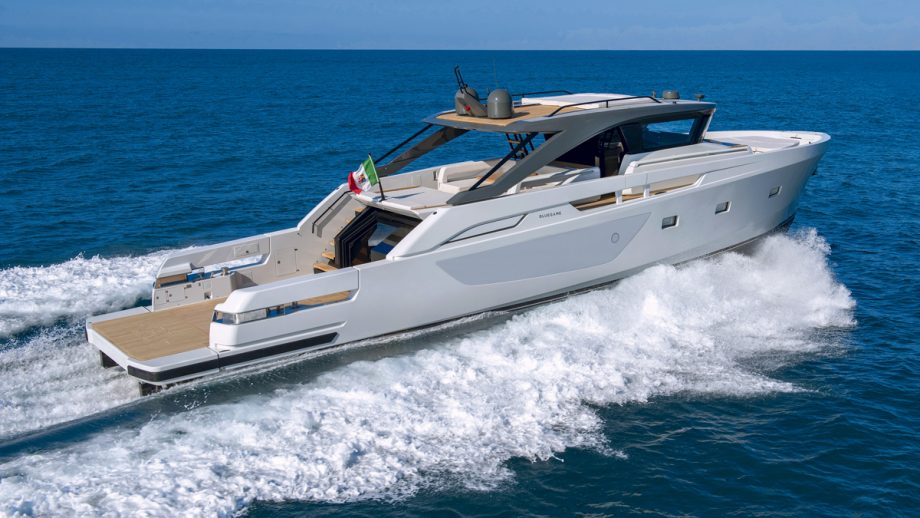 Sanlorenzo’s sub-brand is making waves with its radical designs. Is this innovative Bluegame BG72 a blueprint for the modern passagemaker? MBY deputy editor Jack Haines reports...

Nothing quite prepares you for the sensation of stepping aboard the Bluegame BG72. To stand on the bathing platform and be met by such a vast expanse of flat, teak-laid deck on a boat that is under 75ft in length just feels downright indulgent.

It’s a boat that challenges you to think differently about how craft of this size can be configured and to discard any notion of conformity.

Padding across the enormous transformer bathing platform, it’s striking how such a feeling of luxury is created by simply having an abundance of clear deck space.

Though it isn’t loaded with toys and gizmos, because of its acreage and sheer openness it feels luxurious and, like the rest of the boat, can be made into exactly what you want it to be.

Customisation is the name of the game with a Bluegame and there aren’t many shipyards – even at this size – that will allow a customer to sit down with a designer and a blank piece of paper to create a boat that is tailored to their exact needs.

The aft deck is the ultimate blank space, free to be loaded with as much or as little furniture as possible. You can fix furniture here if you want but that sort of defeats the object given you have the raised aft cockpit on the deck above with a great mix of lounging and seating options.

If water toys are your thing then there isn’t a boat in the sector better equipped to serve as a base. Tenders, jet-skis, canoes and paddle boards can all be loaded onto the aft deck with an optional crane to lower them into the water, creating a floating toy chest of epic proportions.

Alternatively, the transformer bathing platform has a lift capacity of 500kg so if you only want to carry a tender it can be launched and recovered from here leaving that aft deck free for sun loungers and bean bags.

The transformer platform is a stunning bit of kit that brings a huge amount of functionality to the aft end of the boat.

Leave it level and it extends the usable deck space by a good 10ft but it also lowers into the water, creating a gently declining access point to the water, where the submerged platform becomes a brilliant spot to don flippers, prepare for watersports or simply wallow in the shallow end.

In port, the platform can be raised up to create almost a full-width passerelle, a far more inviting prospect than the usual narrow, wobbly affair.

Read Jack’s full review of the Bluegame BG72 in the February issue of MBY, which is out now.