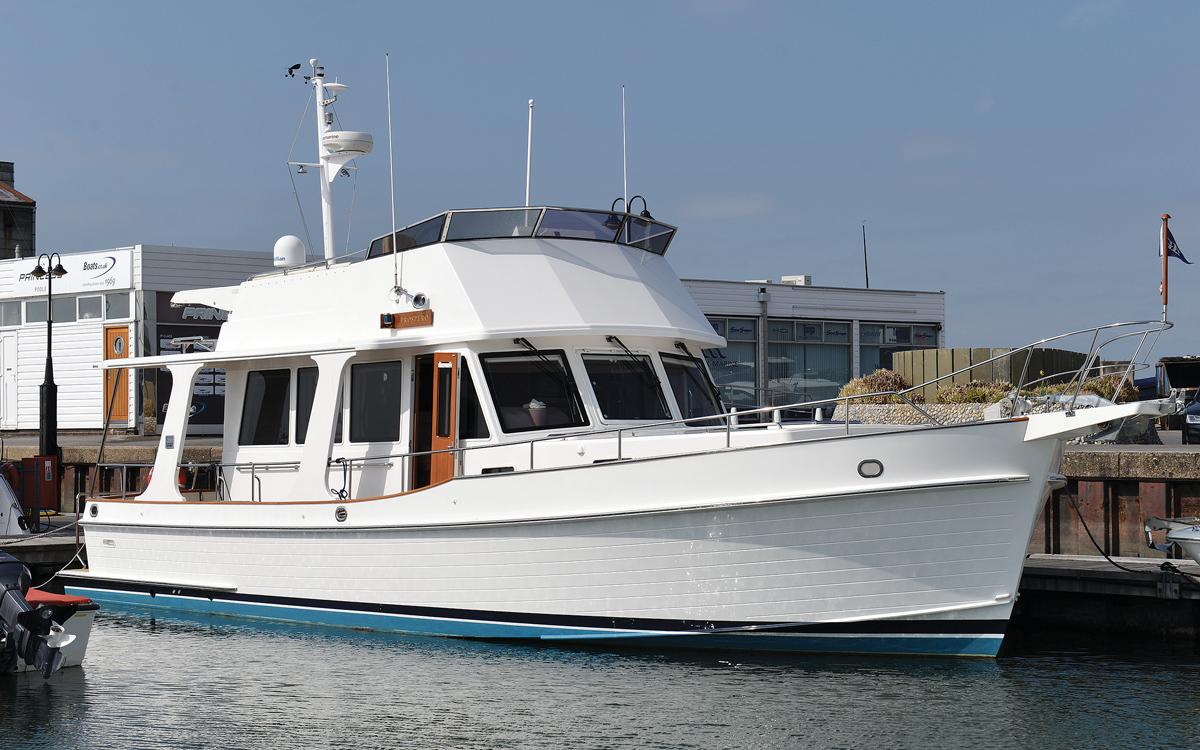 Nick Burnham takes a closer look at the Grand Banks 47 Heritage, the first Grand Banks to be designed with a proper planing hull, and now a highly appealing option on the used boat market

“The Grand Banks 47 Heritage was created in response to customer demand. Clients loved the Grand Banks style, but wanted the ability to cruise at faster speeds. This boat gave them that”. I’m talking to Colin Watts, director of Boat Showrooms and guru of all things Grand Banks, and he’s describing the gestation of the 47 Heritage.

Introduced in 2005, the boat was initially mooted to take over from the venerable Grand Banks 42, a classic that dated way back to 1968. It was (and still is) the archetypal trawler yacht and Grand Banks was keen not to mess with that winning formula.

The company turned to naval architects Sparkman and Stephens for a design that followed the styling cues of the original, delivering low sweeping teak-capped bulwarks and solid-looking upright superstructure. The difference was under water – a planing hull better suited to the larger engines and higher cruising speeds demanded by buyers.

The Hardy 50 is a tough, Category A bruiser with excellent aft cabin accommodation

Initially launched as a 44, the company quickly realised that hull dynamics could be improved further by extending the hull beneath the bolt-on-style swim platform to increase the waterline length. However, that created an administrative issue with the American Boat & Yacht Council (ABYC) who objected to the now 47ft boat being badged a 44, an issue resolved by renaming the boat a 47.

The 47 Heritage was born, and in fact ended up a replacement for the larger Grand Banks 46. In 2008 Grand Banks decided to extend the transom to the end of the waterline and revert to a bolt-on-style platform, and in 2010 the flybridge overhang of the Europa version was increased to match it.

Grand Banks built two versions, the classic aft cabin configuration that took accommodation almost the full length of the vessel called the CL, and the Europa, which was an aft-cockpit boat. Both sit on the same hull taking full advantage of the massive, near 16ft, beam to gift wide, deeply bulwarked side decks, and both are near identical back to the triple upright windscreens.

That extension allows space to store a dinghy behind a generous, high-sided flybridge. The CL gets the same flybridge minus the overhang – the dinghy instead sitting on the cabin roof of the aft cabin. It loses that shaded aft cockpit, and although it still has a lazarette, it’s far smaller.

Read our full used boat review of the Grand Banks 47 Heritage in the August 2019 edition of Motor Boat & Yachting.