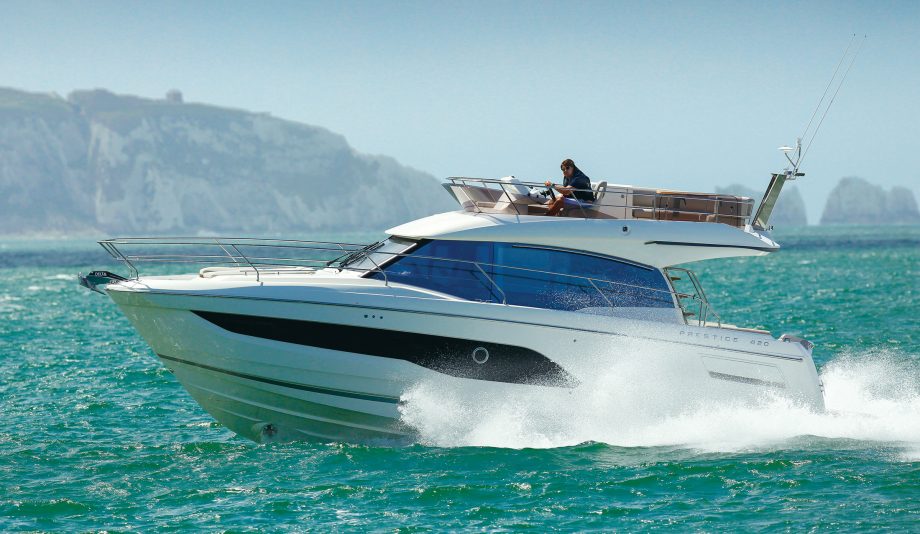 The 420 Fly is more than a mid-life facelift of an existing model. With new engines and an improved interior layout, is the entry-level Prestige better than ever?

There are some things that you expect of Prestige and some that you don’t. Expected: spacious interiors, practical design and an eye-catching starting price. Unexpected: performance, which may not knock your socks clean off but certainly gives them a good tug.

It’s not outright speed we’re talking about here, that is in line with the rest of Prestige’s models, almost all of which top out at around 30 knots and cruise at 22. No, it’s the unexpected mid-range grunt that makes you sit up in the helm seat and take notice.

For anyone who has driven a boat with the 6.7-litre 425hp Cummins this won’t actually come as much of a surprise as this is a motor whose peak torque of 1,424Nm comes in at 2,000rpm, meaning the surge in performance from 18 knots into the mid-20s is rampant. This on a 43ft flybridge cruiser with two cabins and a light displacement a whisker over 10 tonnes.

In a bid to make running this entry-level model in the Prestige flybridge range as simple and affordable as possible, the yard has moved away from Volvo IPS pod drives on the updated 420 and made the switch to the Cummins and shafts in a V-drive arrangement.

This way the owner is relieved of the servicing and maintenance costs of a pair of pod drives but gets the same amount of space on the lower deck thanks to the aft positioning of the engines. A happy by-product is that the boat is fitted with a pair of some of the most reliable and gutsy motors on the market.

There is the option to have the detuned 380hp engines, which use the same block, and though the top speed will likely drop below 30 knots with a full cruising load on board they still have the same character as the 425s with deep reserves of torque in the midrange.

Torque matters, too. Top speed is of no great importance on a boat of this style, it is its ability to maintain momentum when its full of fuel, water and gear for the six people it can sleep, especially in big seas, that really matters. In a rolling swell the engines’ ability to summon vast quantities of shove and heave the boat out of troughs is exactly the sort of performance that is needed.

From the flybridge helm, on a test boat with 80% of the 1,170-litre fuel tanks full, no water and light stores, the pickup into the mid-20s was eyebrow-raising and there is very little lag between burying the throttles and the boat responding.

Read our full review of the Prestige 420 Fly in the October issue of MBY, out September 3.