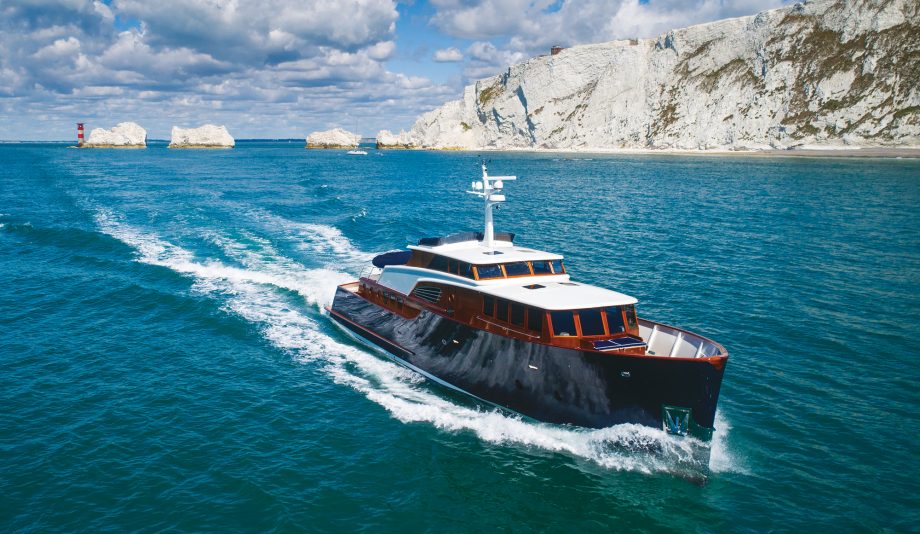 The Spirit P70 is a motor yacht of rare beauty and artisan skill, crafted around a set of hard numbers. One thousand nautical miles at an average cruising speed of 18 knots. For the man who commissioned her, that distance separates a home berth in Southampton from his cruising grounds of choice in the Baltic and his ideal was to be able to make that trip non-stop at a cruising speed just shy of 20 knots.

In principle, a simple equation but the business of developing the concept from the drawing board to launch is far more complicated. The P70 was on paper for over a year and Spirit Yachts’ CEO and head designer Sean McMillan drew 22 exterior profile concepts before the final one was signed off.

Construction took three years, partly due to the COVID-19 outbreak, but mainly because building a boat this way takes time and craftsmanship of the highest standard. A core team of eight pieced together the structure which combines a sapele ring frame, Douglas fir longitudinals and 3mm thick kaya wood veneers, bonded together using vacuum-infused epoxy resin.

Varnishing the mahogany interior alone took three men almost seven months to complete. See the yacht up close and all thoughts of fuel consumption and cruising range are banished, replaced with open-mouthed amazement at the Spirit P70’s sheer elegance.

You are immediately drawn in by the purity of its lines and the extraordinary level of craft and detail that oozes out of every pore. The thin layer of GRP scrim that coats the yacht’s exterior is as even and shiny as the surface of an undisturbed pond.

A tumblehome stern and gentle flair of bow with high enough bulwarks to negate the need for any unsightly stainless steel railings. Open scuppers hint at the yacht’s passage-making intentions and stand ready to swill away deck water if you take a big one over the bow.

The engine vents were designed and built from scratch, their mix of timber and stainless steel designed to ape the vents of a Mercedes 300SL. There is elegance in its slender form, too, with a length-to-beam ratio of 4.5:1 compared to the 3:1 of most modern cruisers; it’s over 2ft (0.61m) narrower than and almost half the weight of a Fleming 65, with which it shares the same long-distance ambitions.

Read our full test drive report on the Spirit P70 in the October issue of MBY, out September 3.