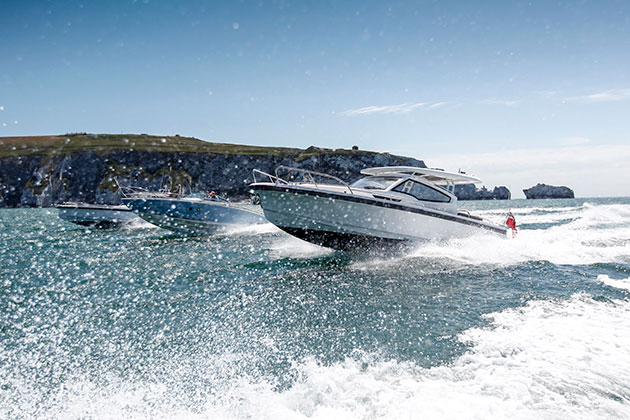 Does the revised Axopar 28 still rule the sportsboat roost or can the new Nimbus W9 or Cormate T27 steal its crown? We take to the Solent to find out

Don’t get us wrong, we are all for testing big boats with their luxurious interiors, acres of deck space and plethora of creature comforts, but when we managed to nail down a back-to-back test of these three boats there was a noticeable spring in the step of the MBY crew. This is pure, undiluted, spray-in-your-face, wind-pulling-at-your-hair, feel-the-water-beneath-the-hull boating.

Why these three boats in particular, though? The original Axopar 28 set the boat world alight when it was launched in 2014 winning countless awards and selling in unprecedented numbers since then. Now it has been replaced with an updated model featuring a brand new hull and countless other small improvements here and there. It is without question the boat to beat.

Nimbus thinks it has the boat to do just that. The W9 was launched at the Düsseldorf show in January on a stand directly opposite Axopar’s. A coincidence maybe, but Nimbus knows exactly what its doing with this boat. Unlike its Finnish rival, the W9 is available with inboard engines as well as outboards but the boat we have here has exactly the same 300hp Mercury Verado as the Axopar. These two will nibble at each other’s heels all day, but there is a third party to keep an eye on.

The Cormate T27, a boat of consummate style and panache offering an intoxicating blend of elegant retro proportions and thoroughly modern engineering. It might just be the best looking boat on sale today. There’s depth too; it has a razor sharp hull and a level of attention to detail that is frankly obsessive. It’s the perfect antidote to the new breed of sportsboat it is up against in this test and is here to hold the torch for the old school inboard. In this guise it has a 250hp petrol V6 but if you have no regard for your eyelids Cormate will install a 600hp motor for a top speed of 70 knots.

These three may occupy the same corner of the market but they go about their business in very different ways. With the Solent as our playground, it’s time to see what they can do.