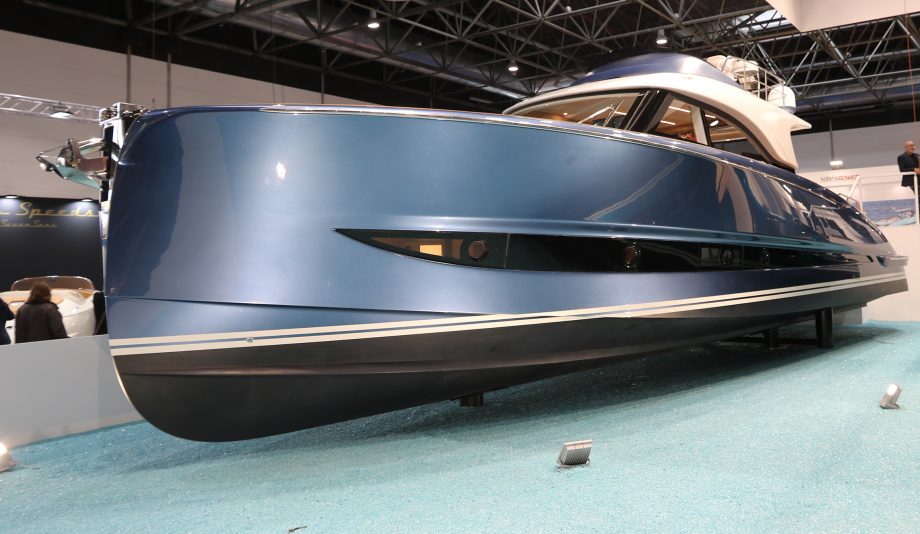 As well as winning the prize for longest name, the Solaris Power Lobster 48 Flybridge also got our vote for the prettiest new flybridge at the Düsseldorf boat show

You need to see it in the flesh to appreciate just how sensuous its curves are and how smooth and spotless the finish is. That upright stem, heavily flared bow and pinched tumblehome stern calls to mind a cross between a World War II motor gun boat and a Riva Aquarama – two of the greatest boating icons of our time – so it’s hardly surprising it triggers all the right emotions. Even the deckware sparkles like jewellery, with every joint and weld polished out and not a handrail in sight to spoil its lines.

It comes at a price of course, both literally and figuratively. Those deep bulwarks and walkaround sidedecks make it wonderfully easy to move around but also limit internal volume. The saloon is smaller than most modern 50ft flybridges, while there is only room below decks for two proper cabins – a master suite in the bow and a twin guest cabin and bathroom to port, although there is a small technical space under the companionway that can be fitted out as a crew cabin.

It’s a similar story up top where there’s a helm seat and sunpad but none of the usual dinettes and wetbars found on most flybridges. Even the cockpit is only really large enough to seat six in comfort, although it does have a handy tender garage.
This is a boat that sets out to offer something different that will appeal to couples or small families who value performance and style over space.

On those counts it looks to have succeeded, with twin IPS 600 or 650 engines and an unusual M-section hull said to offer refined cruising of up to 35 knots, easy handling and stable sea-keeping. We sincerely hope the yard’s vision and bravery is rewarded.