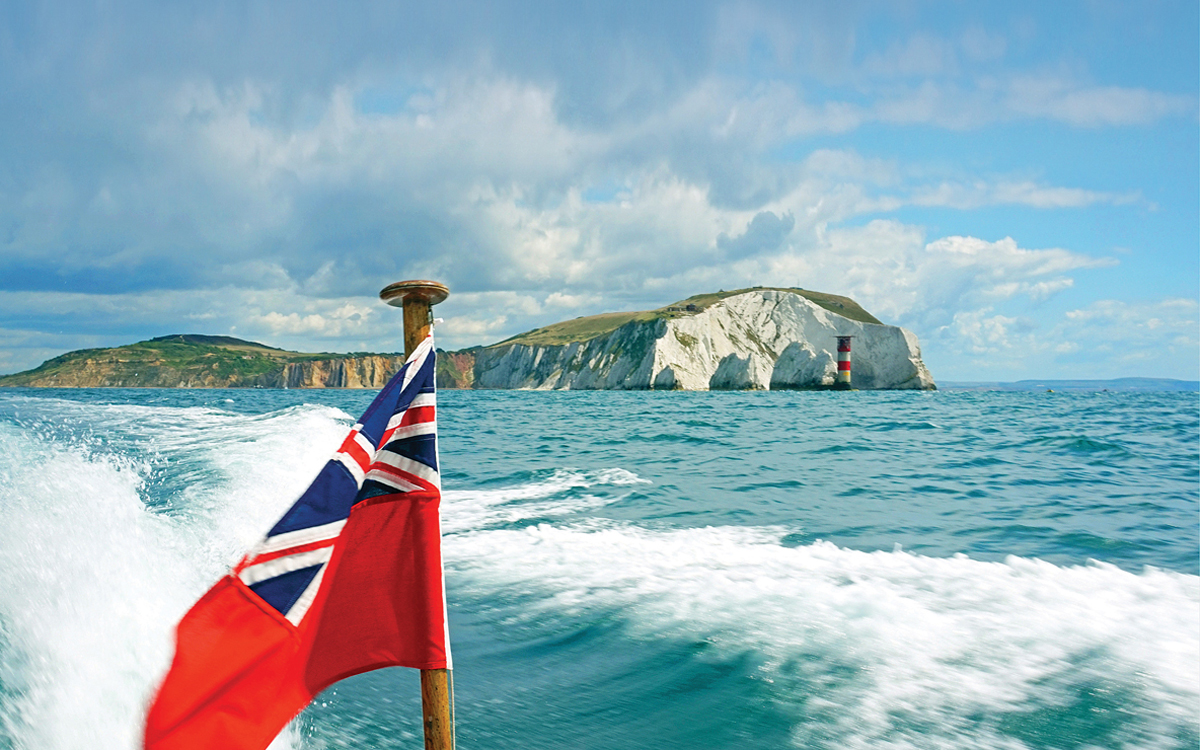 Make the trip over to the Channel Islands or France can be a very rewarding experience. Peter Cumberlidge shares his extensive knowledge of this open-sea passage

Needles or Poole to Cherbourg

The 60-mile track from the Needles to Cherbourg west entrance crosses a 15-mile band of shipping at an acceptable angle. A similar crossing from Poole cuts the lanes almost exactly at right angles. Fairly simple navigationally, these familiar routes should never be taken for granted. The Channel can turn rough quickly in the wrong conditions, when a family cruising boat suddenly seems small and vulnerable.

Port Chantereyne is Cherbourg’s bustling marina, near the old town

In clear weather the bold north coast of the Cotentin Peninsula is an easy visual landfall and shows well on radar. From the Needles you come in a couple of miles east of Cherbourg fairway buoy and from Poole a little closer. My arrival waypoint is about 250m west of a circular stone fort at the west end of Cherbourg’s central breakwater.

You need to be aware of shipping. Cruising south from the Needles or Poole you meet down-Channel shipping first. Although in open water you have notional right-of-way over ships crossing from port, try to alter course or speed in good time to show you intend passing under their sterns, unless you are obviously crossing well ahead. Up-Channel shipping has right-of-way as you cross from the north and will expect you to keep clear.

When you first see a large ship it hardly seems to be moving, but the rate at which a distant blob becomes a massive hull is staggering until you know that container ships can cruise at up to 25 knots, laden tankers about 14 knots and Channel ferries up to 27 knots. Fast ferries bat along at nearly 40!

In many cases you’ll find no action is needed because distant fast-moving ships pass well ahead. The relative tracks of smaller, slower ships can be more difficult to judge. Slowing down yourself usually makes the picture clearer and eases tension. Then the question of whether or not a vessel will pass safely ahead usually resolves itself.

On Channel crossings there may be a case for turning back if fog swirls in before you reach the shipping and visibility is poor, though much depends on your radar fluency and experience. In quiet conditions though, especially with AIS, it’s not unreasonable to press on if you know your systems well. Apart from keeping a sharp eyeball and electronic lookout, slow to a moderate speed that gives you time to think. Make any course changes boldly and in good time so your actions are obvious on ships’ screens.

As you arrive in the bustling ferry port of Cherbourg there is a large sheltered marina, Port Chantereyne, near the old quarter of town. The grand outer harbour is four miles wide, protected by long breakwaters with two entrance gaps. From the main, west entrance, the marina is still two miles away. Cherbourg’s friendly yacht club is always popular with visitors and there are some notable restaurants ashore.

Taking boats over to Cherbourg from the Hamble area, I usually head down the Solent, stop a night in Yarmouth and leave next day from the Needles. However, boats based around Chichester would naturally start a Channel crossing from near Princessa W-cardinal buoy off the Isle of Wight or from the Nab Tower. From either point it’s about 65 miles to Cherbourg, which is fine on a calm day except that the direct track crosses the shipping at a pronounced angle so you’ll spend more time traffic watching.

An alternative is to cross less obliquely to St Vaast-la-Hougue, on the east side of the Cotentin Peninsula, and hop round to Cherbourg later. St Vaast harbour is attractive and the main landfall constraint is keeping clear of Pointe de Barfleur Race. Try to pass this corner just before high water slack, when you’ll have a good hour for the last dozen miles before St Vaast marina gate closes.

Weymouth or Portland to Alderney

The 55-mile run from Weymouth to Alderney is about the shortest possible crossing of the central Channel, with few complications except dodging ships and recognising that the streams may be strong as you approach Alderney. On the English side your departure will be one of the Shambles bank buoys east of Portland Bill. The direct track towards Alderney cuts the mid-Channel shipping almost at right angles and my suggested final approach passes generously clear of the reefs two miles west of Alderney entrance.

Weymouth or Portland to Guernsey

This 72-mile passage west of the Casquets gets you to St Peter Port in a day, ready for cruising on to Jersey or Brittany. My route leads from the Shambles bank directly to the north-east edge of the Casquets up-Channel TSS and skirts this traffic at right angles. Then you can press on for a west Casquets waypoint before continuing south towards Guernsey.

It’s an easy run from the Casquets down to waypoint 22 at the north end of the Little Russel, a mile north-east of Platte Fougère lighthouse – a stubby white tower with a black band. From here to St Peter Port pierheads is less than five miles.

Tor Bay or Dartmouth to Guernsey

Tor Bay or Dartmouth boats usually make for Guernsey’s north-east corner and come down the Little Russel towards St Peter Port. Arriving off Guernsey you often see its higher, more distant south end before the north coast appears. It may also show up first on radar. Streams in the Little Russel reach six knots at springs, so try to catch slack water here. A weather-going tide stirs up vicious overfalls in the northern part.

In poor visibility, it can be safer to arrive off Guernsey’s south-west corner, skirt Les Hanois lighthouse and follow the south coast a mile or so off before approaching St Peter Port from the south.

The coastal legs to Alderney and down to Guernsey seem less daunting than the Channel crossing, yet the Alderney Race needs treating with respect and even fast boats should time the tides carefully. From Cherbourg, a good time to arrive off Cap de la Hague is 50 minutes before HW Dover, on the last of the north-going stream through the Race. You then have slackish water for the 10-mile jump to Alderney harbour. Otherwise arrive off La Hague five hours after HW Dover on the dregs of the south-going tide and shoot over to Alderney before the new northerly surge gets going.

From Alderney to St Peter Port is 28 miles through the Race, but in quiet weather the Swinge north of Alderney is a useful short cut if you go through at slack. For the east-about route round Quénard Point, leave Alderney as the north-going stream is finishing in the Race and about to turn south-west. On this timing fast boats will arrive at St Peter Port near low water.

You can try a ‘back door’ route into the Channel Islands by cutting south from the Alderney Race for the 12 miles down to Diélette on the Cotentin Peninsula. You need the right weather, because this side of the peninsula faces west and its three main harbours have tidal constraints. But in quiet conditions, easterlies or gentle north-westerlies, this delightful way south is no problem if you work the tides.

Coming from Cherbourg, aim to round Cap de la Hague 2½ hours before HW St Helier, with the tide rising nicely at Diélette. Don’t leave Cherbourg too late though, or you’ll meet a strong foul stream off La Hague.

Diélette has outer waiting pontoons and an inner basin entered above half-tide. Its waterfront is overlooked by traditional Normandy houses and not far inland lies open country, whose winding lanes are alive with skylarks on summer afternoons.

Continuing south from Diélette you skirt Flamanville power station and then it’s 12 miles past glorious golden beaches to Carteret, an active tidal port accessible two hours each side of high tide. The harbour channel dries to sand, but the marina at its head retains a depth of 2m at the visitors’ pontoons, which look across the dunes and marshes of the upper estuary.

Sometimes we press on for Jersey’s east coast and tuck into St Catherine’s Bay. You can anchor here behind a breakwater or borrow a mooring. There’s nothing much ashore, but the surroundings are restful as you muse on whether to coast down to Granville or cut between Les Minquiers and Îles Chausey to reach St Malo and the River Rance.

The River Rance below Plouër-sur-Rance in Brittany

Then steer SSE to round Pointe du Roc before turning in towards Granville. It’s sensible to aim to arrive two hours before high water.

The 54-mile passage from St Peter Port to St Malo leaves Sark well to the east, leads six miles clear of Jersey’s west coast and skirts the west edge of Plateau des Minquiers, outside the NW Minquiers N-cardinal and SW Minquiers W-cardinal buoys. From St Peter Port you can head directly for a waypoint west of the SW Minquiers buoy and from there track SSE to the outer buoys of St Malo’s Chenal de la Grande Porte.

The St Malo breakwater with its distinctive lighthouse. It is 54 miles from St Peter Port

The first French land you normally see is Cap Fréhel, which appears on the starboard bow as you approach the SW Minquiers buoy. Closer to St Malo, the distinctive hump of Île de Cézembre lifts ahead of the mainland coast, followed by the tall church spire of the old town.

Most Jersey boats cruise down to St Malo east-about Les Minquiers, a 35-mile run nicely sheltered from westerly swell. Within two hours of high water you can head straight for the North Minquiers N-cardinal buoy before tracking south towards the SE Minquiers E-cardinal. This line leads east of Le Coq red-and-white beacon. From the SE Minquiers buoy, it’s 12 miles down to La Conchée fort and the most direct way into the St Malo estuary.

This 25-mile passage is a pleasure in quiet clear weather. From St Peter Port, set off for a waypoint a mile west of La Corbière lighthouse on Jersey’s south-west corner. This keeps you clear of drying heads off La Corbière and lines you up for the Western Passage along Jersey’s south coast, inside more drying dangers.

Brittany destinations from Guernsey and Jersey

St Cast has a soothing marina where you lie below a wonderful Riviera headland of soft pines and villa gardens, looking towards a crescent beach. Binic is an amiable seaside town with a cosy marina reached near high water across a mile of drying sand. At springs the gate opens for two hours before high and at neaps for only an hour.

As you come in, the rocks to starboard are not hostile fangs but friendly breakwaters stretching towards Île de Bréhat. At the head of the bay, Paimpol town clusters round a sizeable harbour reached through a lock. From Paimpol outer anchorage you can follow the Chenal de la Trinité north towards Bréhat and the Trieux estuary.

Guernsey to the Trieux estuary

A direct line from St Martin’s Point to the Trieux estuary is 35 miles SSW. Unfortunately, Roches Douvres and Plateau de Barnouic are in the way, so your passage will be a dog-leg on one side or the other.

I like to pass Roches Douvres down-tide with plenty of room to spare. Cruising west-about, stay three miles from the 200ft lighthouse, which you often see before losing sight of Guernsey. From west of Roches Douvres, head for a landfall waypoint a short mile north-west of Nord Horaine N-cardinal buoy, which guards the dangers off La Horaine tower. The Grand Chenal de Trieux leads into the estuary at 225°T.