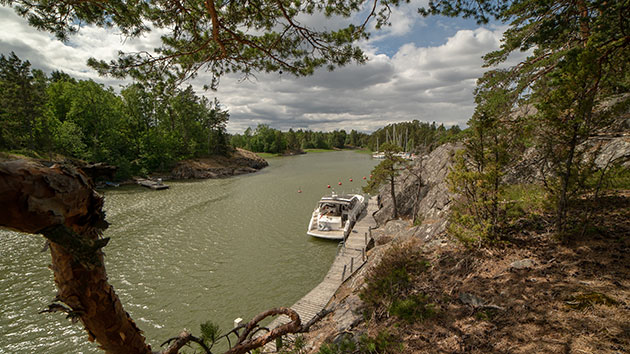 What started out as a crazy idea after a couple of bottles of wine while sitting by the log burner on a grim wet November day was suddenly starting to look very real.

As a professional film and documentary maker I’ve always enjoyed adventure but even by my standards this was looking quite ambitious. I’d taken my previous boat, Shark Bay, a Sealine 34 around the British Isles in 2014; a year later I upgraded to a Princess V39, Cecienne, in Mallorca and cruised her back to Falmouth via Morocco and the Bay of Biscay.

In 2016, in search of more excitement, I took her to Norway’s Lofoten Islands north of the Arctic Circle. So this year the plan was to take Cecienne through the Baltic to St. Petersburg in Russia!

And with encouragement from Hugo at MBY and support from Jo in Princess’s marketing department, we left Falmouth on a flat calm April morning to try to turn that crazy winter dream into reality.

Where does the story start? After three days running up the Channel and along the flat Dutch coastline, all in glass calm seas, the Kiel Canal feels like the true beginning of our adventure. Criss-crossed by small ferries and with the occasional big ship passing in the other direction, it’s the gateway to the Baltic, a mellow 60-mile, 8-knot transit through German countryside that spits you out into the Baltic Sea.

Until now, to me the Baltic was just a big void on the map, about which I knew virtually nothing. Yet nine countries have Baltic coasts – try naming them all without looking at map!

According to Stefan Wilms, Princess’s agent in Ancora marina in Neustadt, the Baltic is not so much a sea as a small shallow ocean where the wind can whip up steep, hard waves with a short fetch, totally different to the rolling waves of other oceans.