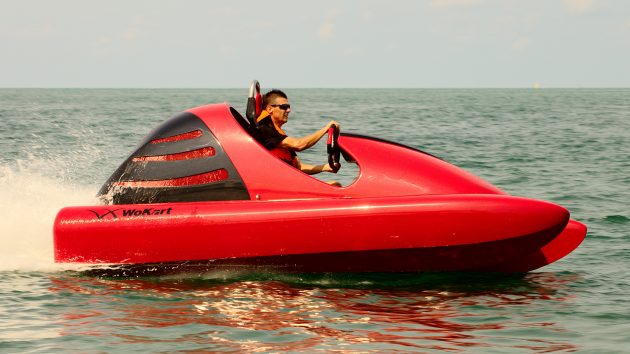 The agility of a go-cart, the speed of a sportsboat and the layout of a catamaran for performance: meet the WoKart!

WoKart?
It’s a portmanteau word that blends the words ‘water’ and ‘go-kart’.

Why so?
Because the concept is designed to blend the incredible agility of a go-kart with a fast sportsboat to give the sensation of a go-kart for the water.

How does it do that?
It has ‘a unique asymmetric catamaran layout (by Dr Albert Nazarov) for a boosted performance’, apparently. We’re told that ‘WoKart transforms water into roads and gives the feeling of driving on water, even in areas where jet craft aren’t permitted’.

So it’s not a jet then?
No, it’s actually outboard powered, and the reason you can’t see it is because it’s mid-mounted in the pod just behind the driver. Putting the weight and thrust towards the middle is another thing that promotes the dynamic kart-like handling.

How powerful and fast is it?
The largest engine you can fit is a 70hp outboard, with which the WoKart is supposedly good for 40 knots, according to the manufacturer. That’s fast enough in a 3.8m boat, we’d imagine!

Where is it made?
Although the WoKart is designed  in Switzerland, it’s actually built in Thailand at CMI, a multinational joint venture under the management of Cobra International.

Can I buy one?
Yes, you can. Production has now begun and they are CE approved. WoKart is advertising the price at $9,800, but that doesn’t include the engine, which needs to be sourced in the country of use.

What if I want to take a friend along with me?
You can’t, unfortunately – this model is strictly a single-seater. But fear not, a larger two-seater version is on the drawing board.

The final look of the 50-knot, active foiling Princess R35's Pininfarina design can now be unveiled