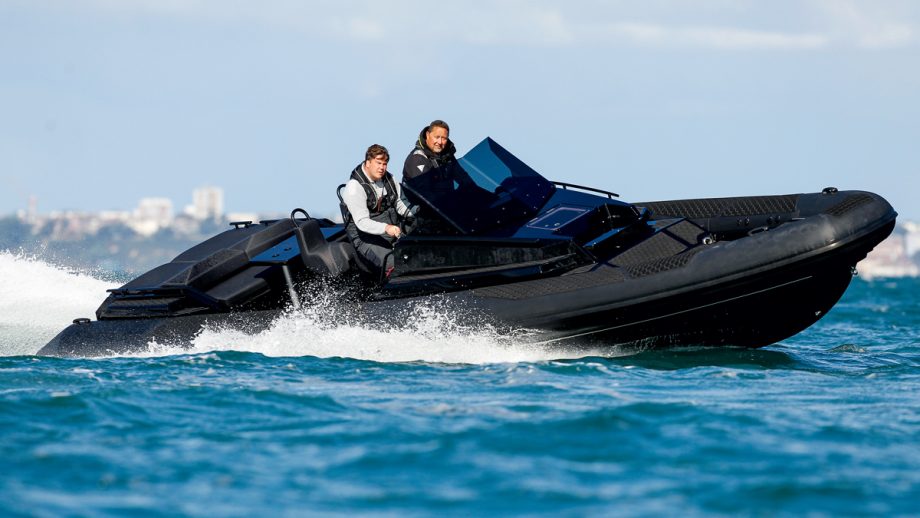 Hailing from Sweden, this new RIB with a Petestep hull and rampant inboard power has Goldfish in its sights. MBY deputy editor Jack Haines heads to Poole to put the Fugu 29 through its paces...

Fugu (noun): a pufferfish that is eaten as a Japanese delicacy, after some highly poisonous parts have been removed. Why would a Swedish RIB manufacturer name itself after a Japanese toxic blowfish?

It could be because, like its spiky aquatic namesake, it can inflate itself automatically thanks to an optional integrated tube compressor or maybe it’s simply because this is a name that you don’t forget in a hurry.

Either way, the flying Fugu 29 makes a sinister first impression at our meeting point in Salterns Marina on a blowy autumn day.

You’d be forgiven for assuming it had slipped out of the SBS base a few miles up harbour given its black-on-black-on- black colour scheme and its low missile-like profile.

You can have white tubes if you prefer but that’s about it when it comes to colour choices. What is immediately apparent is that this is not some tube-lined floating patio, designed solely for heading out to the beach and lazing around on a summer’s day.

The cockpit is dominated by four Ullman Bulldog shock-absorbing seats complete with pop-out foot pedals so that passengers can fully adopt the brace position.

It’s as sparse and focussed as a racing boat with the odd nod to comfort, such as a stubby rear sunpad and a very basic moulded table.

The “cabin” is a black hole of exposed mouldings and thinly padded seating with a token vee berth that you’d have to be desperate to use for anything more than sheltering from the rain.

There is the option to have a toilet down here, which would be useful, but our £166,000 test boat didn’t have it fitted.

Progress to the foredeck is made by squeezing past the helm station and walking on the tubes where there is a shallow perch just ahead of the windscreen, which is only really useful when the boat is stationary or moving at displacement speeds.

With the anchor mounted on the transom the space in the bow that would ordinarily be the anchor locker is given over to storage space, large enough to swallow fenders, lines and covers.

I’m sure you’re getting the picture, but to dwell on the Fugu’s lack of creature comforts is to miss the point of what this machine is designed for.

X-Power 33 shares its DNA with the HOC Yachts 33
A survey addresses the condition of the boat, but machinery should have an independent assessment from an engineer

Intriguingly, it also features a soft-riding Petestep hull (as seen on the new X-Yachts X-Power 33) with BYD responsible for structural engineering and optimisation.

This combination offers all the usual advantages of diesel efficiency and ready availability of fuel but also delivers blistering performance. The quoted top speed is 60 knots while at 40 knots it is said to burn less than 1 litre per nautical mile.

To read Jack’s full review of the Fugu 29, pick up the February issue of MBY, which is out now.