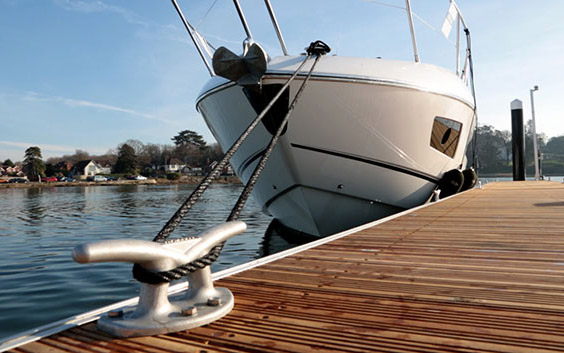 The ability to lasso a cleat can make coming alongside a lot safer and easier. Our step-by-step guide shows you how to do it

Lassoing a cleat or post with a line can be extremely useful when being pushed off a berth by the wind, or the skipper is having a hard time coming alongside. It works equally well on a line taken from a stern, midship or bow cleat but we are showing a bow line as that’s usually the hardest due to the height difference.

The first task is for the skipper to balance the boat on the elements to hold it stationary. The next is to brief the crew on the plan, place an extra fender closest to the point of contact and choose a suitable line. This needs to be long enough to reach from your chosen cleat, around your selected target and back to the cleat leaving enough slack to be tied off safely but not so long or heavy as to be unwieldy.

Place one end on the cleat, pass the line under the rails, then coil it into equal sized loops by holding the cleated end in one hand and using the other to draw out an arm’s length of rope before looping it back into your fixed hand.

Make two or three coils and then place a finger across them, before making two or three more coils. This splits them into two sets and ensures you pick up the latest set with you’re free hand once you’ve finished making them.

Hold the tail end in one hand with half the coils on top (if your hands aren’t big enough, take the loose end back under the rail and stand on it) then put the other set of coils in your other hand. The key to throwing them is not to aim down at the target cleat but up and outwards. Bring your hands to your chest and throw your arms up and outwards. This creates a nice big loop which falls down over the cleat.

Now bring the loose end under the rails and gradually pull in the excess slack to leave a short but still slightly loose line – don’t pull it in tight or it will snub the bow in too close and prevent the stern from coming alongside – then make it off on the cleat aboard. Personally, I am wary of holding lines with just a single turn around a cleat as I have seen too many trapped fingers happen – properly cleated off is safer but you need to judge the amount of slack required.

To use the lassoed line to help the rest of the boat into the berth, take up the slack by letting the elements push the bow out or by gently going in and out of gear on the outside engine until you feel the line come tight. As this happens engage the outside engine astern and leave it in gear. This will pull the line taut and bring the stern of the boat towards the pontoon. By keeping pressure on the line the boat will swing in under control.

If you are concerned about the line pressure, a nudge ahead on the inside engine will ease the tension and assist the turn. Just before the stern touches the pontoon, take the boat out of gear momentarily so it kisses the pontoon, then back into gear to hold it alongside whilst you attach further lines.

The definitive guide on how to tie up your boat correctly