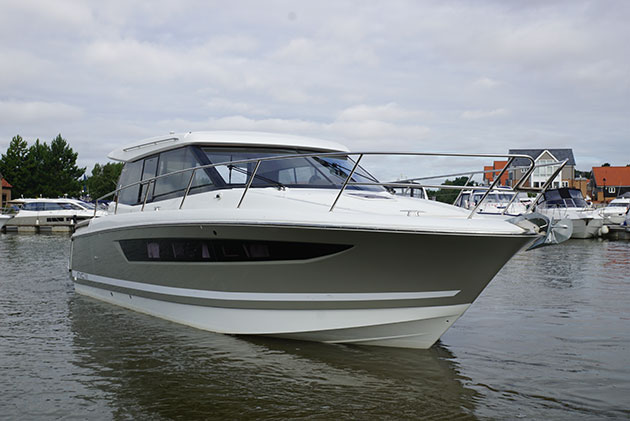 The innovative Jeanneau NC11 was built with practicality and usability in mind; Nick Burnham discovers how it stacks up as a secondhand purchase

Launched in 2010 and the first of a new model range for Jeanneau, NC11 stood for New Concept 11 metres.

Prior to this you’d have to have bought one of its fishing-oriented Merry Fishers if you’d wanted a fully enclosed Jeanneau this side of a flybridge Prestige – although the company had started introducing hard tops to its larger Leader boats, these were open-backed cockpits so the saloon remained firmly on the lower deck.

Aiming for a slice of the Northern European market, the idea behind the NC11 was coupe-style enclosed main deck living that would take the fight to builders already in this segment such as Nimbus and Aquador.

Of course when entering new market territory it’s important to come up with something different. A ‘me too’ approach simply sees buyers continuing to purchase from established builders. The NC11 launched a two-pronged attack that combined Jeanneau’s mass production techniques and economies of scale with some genuinely innovative thinking to create something quite different and then market it at an attractive price point.

It worked. Jeanneau sold almost 400 of this model over the following 8 years, and the NC line now runs from 9 to 14 metres across four distinct models.

Designer Vittorio Garroni and Premorel Concept took the proverbial clean sheet of paper and created something fresh, interesting and above all, useable. The exterior profile is both conservative yet innovative. There’s nothing stand-out modern about it, but details like the long run of glazing in the topsides and the ‘cab forward’ foredeck that allows the deck saloon to stretch further toward the bow were both ideas well ahead of their time.

Read the full report in the April 2019 edition of MBY.

The Jeanneau NC33 joins a range that combines Scandinavian practicality with French style and value for money. How does it