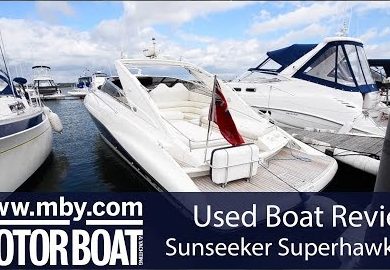 The last in the high-performance Hawk bloodline and 007’s weapon of choice, a used Sunseeker Superhawk 43 is a tempting prospect

A rather snazzy black and stainless-steel Cross pen sits on my desk. Engraved with ‘100 yachts over 100ft’ on one side and ‘Sunseeker’ on the other, it was given to me by the company when it celebrated building its 100th 100ft-plus yacht.

Today a big player in the production superyacht world and with a range that starts at 50ft, what’s interesting is that Sunseeker maintains its image as the ‘sporty’ one of the three big UK builders, despite the absence of any seriously high-performance craft in its current range.

The reason of course, is heritage. Pick up a 1989 Sunseeker brochure and it’s chock full of racy machinery.

The tone is set with a Mustang 20, capable of 60mph with the largest engine, or choose from the Hawk 27, Mohawk 29, Tomahawk 37 or the awesome Thunderhawk 43, all penned by raceboat designer and driver Don Shead.

Back then, the only flybridge boat was the rather ungainly-looking Jamaican 35. How times have changed.

Yet throughout the company’s evolution into today’s world of seven-figure leviathans and black customer Range Rovers, there has always been a performance boat in the mix, at least until recently.

The late 1990s was the time of the Superhawk 41 and the early 2000s saw the popular Superhawk 34 immortalised on screen in the most exciting James Bond boat chase ever, tearing up the River Thames in the pre-title sequence of 1999’s The World is not Enough.

The Hawk heritage finally died almost a decade ago with the boat you see here, but what a swansong it makes. Launched in 2006 at the Southampton Boat Show, the Superhawk 43 was positioned at the front of the stand and finished in an eye-popping black and gold spraypainted livery.
0 Videos