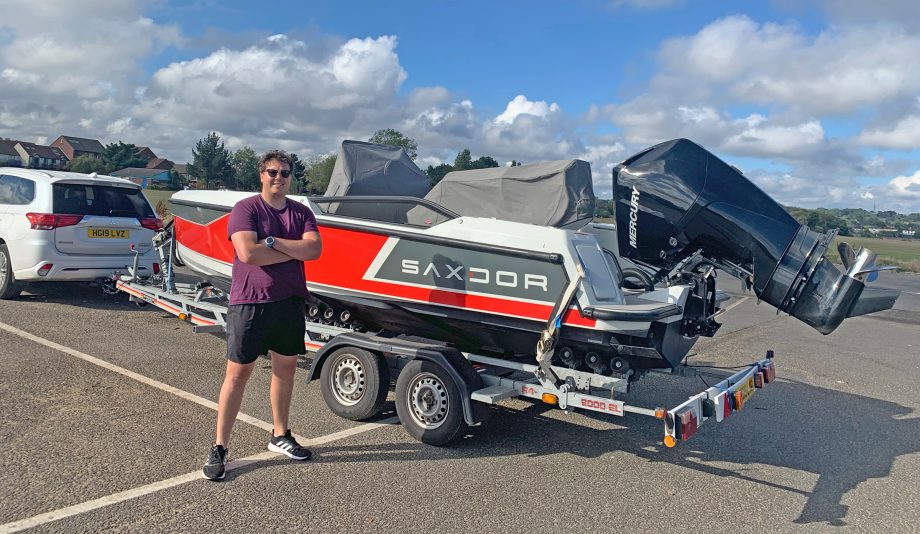 Is there more to the Saxdor 200 Sport than striking looks and a decent turn of pace? The opportunity of week-long test gave Jack the chance to see what this funky starter boat is like to live with.

Back in the September edition of the magazine, editor Hugo and I tested the 100hp and 150hp versions of the Saxdor 200 Sport. Driving home from the test I couldn’t help wondering, despite what a hoot the boats had been to blast around on for a day, what you would actually do with one once you’d done as much blasting around as you could possibly want to?

There’s no fridge, nowhere to cook and, in the Scooter variant with triple jockey seats, not really anywhere to kick back and relax once the boat is on anchor. I thought the concept was excellent, the price point even better and the hull masterful in its ability to handle punishment but more time was needed on board to assess whether it’s more than a fun toy – a jet-ski with delusions of grandeur – or a legitimate starter boat.

Thankfully, the opportunity fell into my lap when Saxdor and the UK dealer Ideal Boat offered us a week-long test of the 200 Sport to properly get beneath its skin and see what it’s like to live with day to day. The even better news was that the boat they intended to lend us had the top of the range 175hp Mercury V6 outboard on the back which, according to the yard, would transform the boat’s behaviour on the water.

The first task on collection day in mid-August was to pick up the boat on its trailer from Ideal Boat’s base in Southampton and tow it back to Poole, where we intended to keep it for the week. My towing is limited to shuffling our Jeanneau Cap Camarat around the yard twice a year when we launch and recover her, so I breathed a sigh of relief when we got to the slipway without the brand spanking new Saxdor detaching itself from the tow bar and skudding past us on the M27.

The boat weighs just shy of a tonne including the engine and it towed nicely, causing little strain for my father’s hybrid Mitsubishi Outlander. It’s a boat that naturally draws a crowd, as we discovered when we arrived at the slipway. A cross between a training shoe and an axe blade with bright orange graphics, a twin-stepped vertical entry hull and Mercury’s angular V6 poised menacingly on the stern, it’s no wallflower and provokes plenty of questions about where it’s made and whether it’s related to an Axopar.

All of the headlines were about the startling £23,000 starting price when the boat was launched but most will want more creature comforts than that basic spec includes and more oomph than the 100hp motor can muster.

Our longer-term test boat, the Scooter variant with jockey seating, was an interesting spec fitted with the top of the range engine and some welcome driving aids like fly-by-wire throttle, power steering and trim tabs but by no means all the bells and whistles that one could add to a 200 Sport like the hard top, four bucket seats and camper tent that transforms the forward locker into a sleeping area for two.

It did, however, have twin Simrad MFDs, a basic Fusion stereo, deck lights and sun pad cushions for the foredeck. All in, a whisker over £40,000, which is a fair few quid more than that £23k headline price but still not bad for such a desirable machine.

The benefits of the 175hp engine are apparent from the moment you slot the boat into gear. The electronic throttle slides in and out of gear with well-oiled precision and the power steering makes light work of swinging the sizeable outboard from lock-to-lock. There is no bow thruster but the boat is a dream to handle at slow speed and because the helmsman is in the middle of the boat it’s very easy to quickly leave the helm and help fend off as you draw up alongside.

Read our full long-term review of the Saxdor 200 Sport in the February 2021 issue of MBY, which is out now.