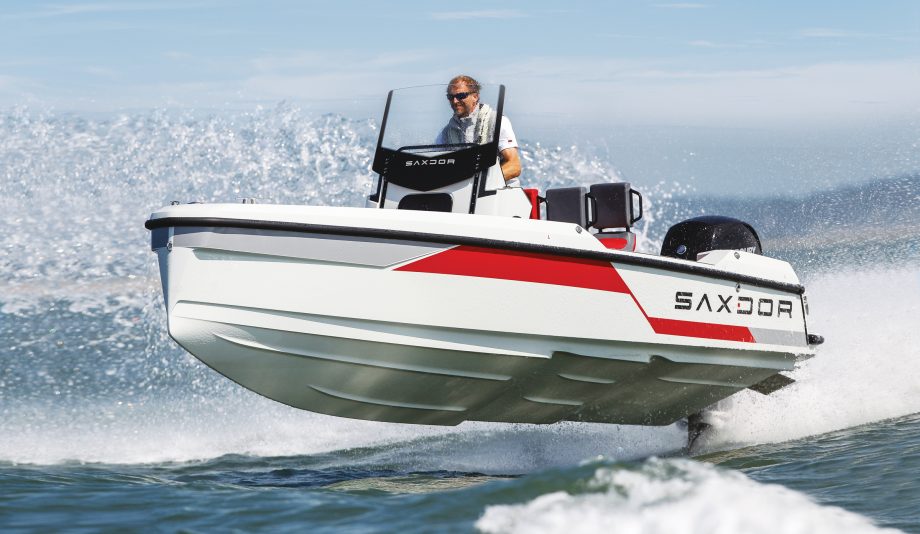 The Saxdor 200 Sport caught our attention with its bold looks and scarcely believable starting price of £22,158 (inc 100hp engine), but how does it perform on the water?

Very rarely do we feel the need to have two boat testers on the same sea trial, but for the Saxdor 200 Sport we made an exception. That’s partly because the dealer had two models in stock with different engines but mostly because neither Jack nor I wanted to miss out on such an exciting and innovative new craft.

You can make up your own mind after reading this but judging from the two models Saxdor has shown us so far (the 200 and the 320 GTO), it looks like being the most exciting new brand since Axopar burst onto the scene in 2014 – and we all know how well that turned out.

Perhaps that’s hardly surprising given that the man behind Saxdor, Sakari Mattila, was also one of the founding partners of Axopar before cutting ties with them and setting up Saxdor as a completely unrelated company. That said it’s not hard to draw parallels between Saxdor and Axopar; they are both Finnish-owned and built in Poland, with edgy styling, vertical bows, outboard engines and competitive prices.

Very competitive in the case of the Saxdor 200. This 20ft sportsboat, complete with a 100hp Mercury outboard engine and a standard spec that includes nav lights and an adjustable windscreen, retails for £22,158 inc VAT on the water in the UK. That’s less than the cost of a hydraulic passerelle on a Princess V55!

So what does your money buy and how has Saxdor managed to make it so affordable? The starting point is a tasty looking twin-step hull with a slender beam of 7ft 6in and an unusually sharp deadrise angle of 22.5° at the transom. This is quasi-race boat territory compared to the 8ft-plus beam and 16-18° you’d normally find on a 20ft sportsboat.

The Saxdor 200 is also exceptionally light at 780kg, excluding engine, or roughly 1,000kg with engine, fuel and a few stores on board – again fully half a tonne lighter than a typical 20-footer. That means strong performance and impressive fuel consumption. It also makes it a lot easier to tow, launch and recover using an ordinary family car rather than a hefty 4×4.

The Saxdor 200 Sport was Highly Commended in the Sportsboats category at the 2021 Motor Boat Awards. All photos: Paul Wyeth

To be fair, it doesn’t really look or feel like a 20ft boat; a 17ft bowrider is probably a better match in terms of useable deck space, while the narrow beam, low topsides, open transom and triple jockey seat configuration have as much in common with
a PWC as they do a sportsboat.

Clearly, the Saxdor has been designed to appeal to both PWC owners looking to take the next step up as well as sportsboat enthusiasts looking for something faster and funkier than the usual offerings. It certainly has the right effect on both me and Jack as we walk down the pontoon towards the twin Saxdor 200s.

With their bold graphics, angular styling and pared back helm designs, they look far sportier and more enticing than the average bowrider – the Ariel Atom of the boat world in a sea of Ford Fiestas. The really clever bit is making such a desirable boat so easy to build.

The Saxdor 200 is available with a hardtop option

By keeping the number and complexity of mouldings to the minimum but giving customers the ability to customise their boats with countless options from engines and seating layouts to hard tops and camper tents, it works on every level. The only obvious missing option is a bathing ladder for the stern.

So far so good, but if those racy looks flatter to deceive out on the water, no amount of add-ons could win over the true boating enthusiast. Thankfully, the hull is a peach, delivering an exceptional ride through the messy Solent chop of our test.

The Saxdor 200 manages that rare feat of performing like a light, nimble, agile craft in flat conditions while feeling surprisingly solid and robust in the rough. Nothing squeaks, rattles or flexes. It’s so good that it makes the 100hp engine feel rather breathless. There’s nothing wrong with its acceleration or mid-range urge but it runs out of steam at 31 knots when it’s clear that hull can take so much more.

The 150hp version is another story, it goes like a rocket and doesn’t stop until it’s knocking on the door of 40 knots. At that speed the 200 Sport does start to feel a little flighty and you become more aware of just how little there is between you and the water.

Those cut down bulwarks exaggerate the impression of speed which combined with the raised central jockey seat makes it feel like you are sitting on the boat rather than in it. Being so small and light, it is prone to being bounced around a bit, requiring a firm grip on the helm and a steady hand on the throttle.

It always seems to land softly, while those twin steps help it to ride wonderfully flat, but the 150hp version (let alone the 175hp) is not for the frail or faint-hearted. Unlike some stepped hulls, it didn’t seem prone to slipping or spinning out when pushed hard through a turn, although the bigger engine will harmlessly spin away excess power if you apply too much throttle too early.

The simple helm console works pretty well too with neat details like the backlit stainless steel switches and optional 9in Simrad touchscreen MFD helping it to look clean and sophisticated rather than spartan.

However, if you don’t specify the chartplotter, you’ll have to rely on Mercury’s smart phone app to display engine data as there are no analogue dials. Protection from the elements is better than you’d think thanks to a lifting windscreen that keeps most
of the wind and spray off your face, although the fiddly handscrews that lock it in place need sorting out.

Personally, I think a fixed screen with a stainless steel surround that doubled as a handhold would be a better (but probably more expensive) option. The open transom also means that rapid reversing or a big wake hitting the stern at anchor can lead to soggy feet, although any water you ship soon drains back out the way it came.

The driving position is good but not perfect; the angled footrest is directly in front of the jockey seat and too steep for taller skippers, while the saddle doesn’t extend far enough forward to grip with your thighs. What’s really needed are a couple of angled-in footrests outboard of the console to brace against and/or a winged back rest to lock you in place.

The two small straps and eyelets holding the hinged seat top in place and giving access to the locker underneath also seem a bit flimsy, they work well enough but secure stainless steel latches would be classier and more robust. It’s a shame the four-seater variant wasn’t available for us to try as the twin helm bucket seats and two-seat aft bench could well resolve this.

The other slight gripe is the rather cheap-feeling Mercury throttle that lacks the smooth, positive shift into and out of gear of some rivals, not to mention a neutral indicator and a lockout switch to prevent accidental shifts into astern. The 175hp version of the Saxdor 200 Sport benefits from the smoother but more expensive fly-by-wire throttle.

The large deck section ahead of the console lifts on a pair of rather basic gas struts to reveal a full-length shallow locker. The (optional) foredeck cushions fit perfectly in here and with the aid of a camper-style canopy can be turned into a useful occasional berth. It all adds yet more appeal to a surprisingly versatile package.

Personally, I think the pop-out fender buttons are a gimmick too far – in the absence of guard rails you need something to tie fenders to but these are fiddly and far less useful than an extra pair of midships cleats.

If this sounds like whingeing, I can only agree, because the truth is we both adore the little Saxdor. It’s fast, stylish, fun to drive and much more practical than any Jet Ski. It’s also unbelievably good value for money while managing to look, feel and behave like a much more expensive craft.

To make the most of its potential you will need to upgrade to at least the 115hp engine and spend a couple of grand on options (judging from the pics, I’d go for the 4-seater layout) but you can still get on the water with all the right equipment for well under £30,000. I can’t think of another boat that gets anywhere close to offering that much fun for that kind of money.