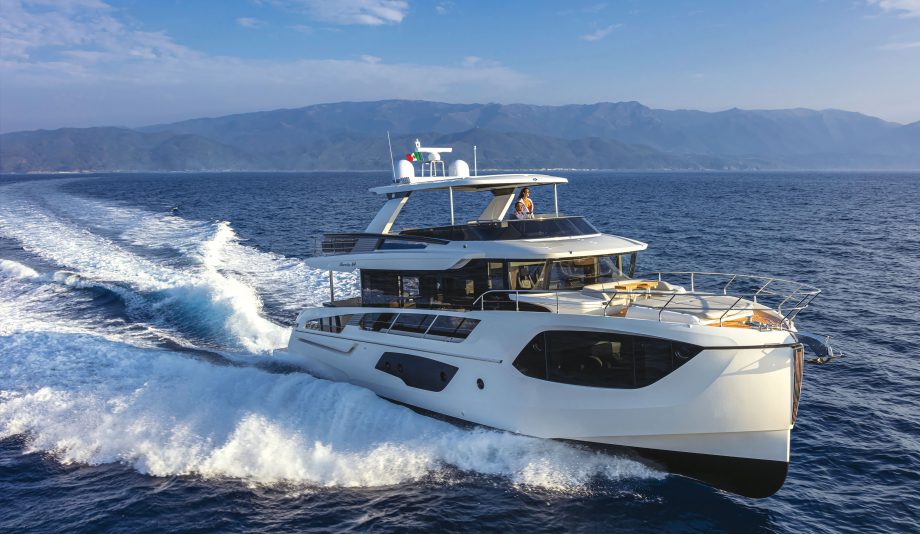 The latest addition to Absolute’s quirky Navetta family possesses all the qualities we admire in the range but with a notable trick up its sleeve...

Here’s a quandary for you: you and your Absolute Navetta 64 are anchored for the night in the sort of bay that inspired you to buy a boat in the first place. Water as clear as gin and not much deeper than the boat’s draught, a white sand sea bed over which schools of tiny coloured fish are swimming and dramatic rock formations casting long shadows across the bay.

The sun sinks, leaving behind enough warmth to sit on the flybridge in a T-shirt with nightcap and then the decision comes. In these conditions, with a perfect morning of weather forecast, which cabin do you retire to for the evening?

The master suite has natural allure. It’s forward on the main deck and sports stunning floor-to-ceiling windows on either side, a walkaround island berth and a beautifully appointed ensuite bathroom. It’s peaceful, mounted on a half deck up and away from the chatter of the kids in their guest cabins and at the opposite end of the boat from the whirring machinery space where the generator and air-conditioning unit are doing their work.

However, on the Navetta 64, there is another equally enticing option at the opposite end of the boat. You can’t fail to notice the additional pair of sliding doors on the back of the 64 and it is here where Absolute’s designers have done their most impressive work.

For here, if you’re willing to part with an extra €74,000, there is a beach club that doubles as a cabin. It doesn’t have the space of the master nor the aesthetic charm but picture waking up here in that crystal clear bay, the hydraulic bathing platform left deployed from the day before so you can go from bed to a morning dip within a few strides.

There’s an ensuite bathroom where you can shower off and then retire to the comfort of bed to drink in what is a pretty spectacular view through those sliding doors. In the day, the end of the bed flips up to create a sofa and transforms the space into beach club mode.

With a fridge, air-con, a television and a toilet, it’s a tempting spot for guests to chill once they’ve been for a swim without the need to head to the saloon to grab provisions. Now some will point out that having a pair of sliding doors so close to the waterline is a risky move but the entire beach club module is sealed and insulated from the engineroom by a watertight door inside the bathroom.

The sliding doors also have a pneumatic seal to protect against water ingress in the event of a wave sloshing onto the transom. With the beach club trend booming, Absolute, in making it into a cabin as well, has ensured that the area doesn’t go to waste once the sun goes down.

If the owner doesn’t want to switch between it and the master depending on where they plan to spend the night then what a cabin to be able to offer guests, especially considering there is a lovely VIP ensuite amidships on the lower deck.

If you don’t opt for the beach club/cabin then you get a regular transom door with access to a large storage void but, in a brilliant feat of packaging, with either configuration there is a separate crew cabin with single bunk and loo accessed via a full height door on the starboard-side deck.

Read our full review of the Absolute Navetta 64 in the January 2021 issue of Motor Boat & Yachting, out December 3.