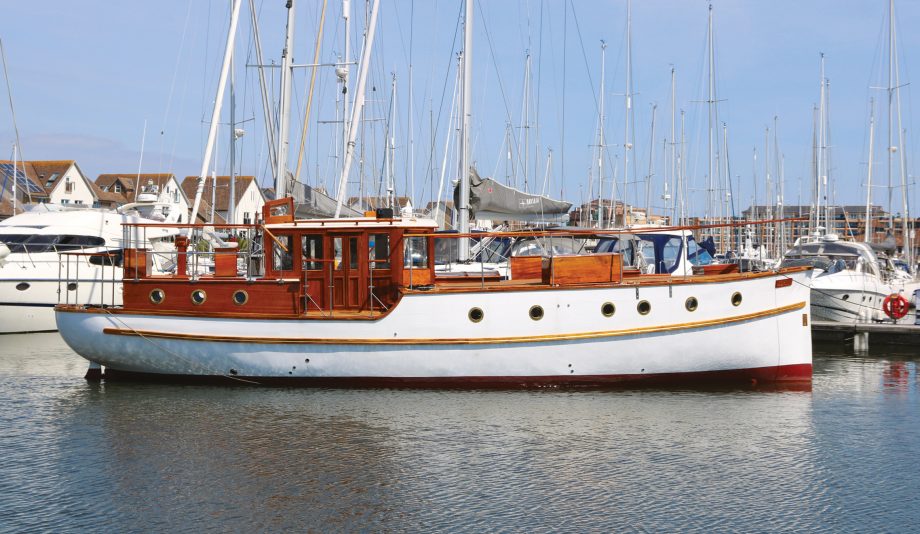 Dorian is one of the few surviving boats to have served in both World Wars, now after a decade-long renovation she’s ready to serve again as a comfortable family motor yacht. Hugo Andreae traces her remarkable history…

Nigel Walters never set out to buy a classic motor yacht, let alone one with a history as long and distinguished as Dorian’s. Until recently any spare time and money that wasn’t devoted to work and family commitments went on his passion for classic British sportscars.

Admittedly, he had grown up around boats, learning to sail in a Mirror dinghy aged nine then graduating to racier Enterprises and Fireballs as a teenager before buying his own Seal 22 pocket cruiser as a young man, but married life, a move to Bedfordshire and the arrival of three children left no free time for boating.

It wasn’t until the mid ’90s, by which time their oldest daughter was 14 and their youngest six, that he and his wife Lyn made the mistake of visiting the Bedford River festival and chanced across a secondhand Sea Ray sportsboat for sale.

“It had a 7.5-litre V8 petrol engine and was totally inappropriate for river use,” says Nigel. “But it looked great so we bought it on a whim.”

It may not have been ideally suited to river life but the family loved it and they ended up keeping it for 10 years despite its increasingly recalcitrant drivetrain.

“It became so unreliable that a weekend without a breakdown wasn’t a proper weekend,” recalls Lyn. But when the driveshaft broke, leaving them stranded miles from home, she finally cracked and insisted they get rid of it.

Lyn then remembered a Sheerline 950 she had fallen in love with at the London Boat Show some eight years earlier, when they had both been indulging their boating dreams, she in the riverboat section, whilst Nigel had wandered off to look at Fairlines and Princesses.

An online search revealed that the 2008 Southampton Boat Show Sheerline was up for sale nearby. Nigel agreed it was better suited to the inland waterways around Bedford than a planing sportscruiser and signed on the dotted line.

They still have the Sheerline today and there the story would have ended were it not for the release of the movie Dunkirk in 2017.

Nigel had recently lost his mother and was looking for a project that would keep his widowed father busy. His original plan was to buy and restore a classic car with him but when that idea fell on deaf ears, he decided to switch tack.

Read the full story of Dorian’s restoration in the August 2020 edition of Motor Boat & Yachting, which is out now.