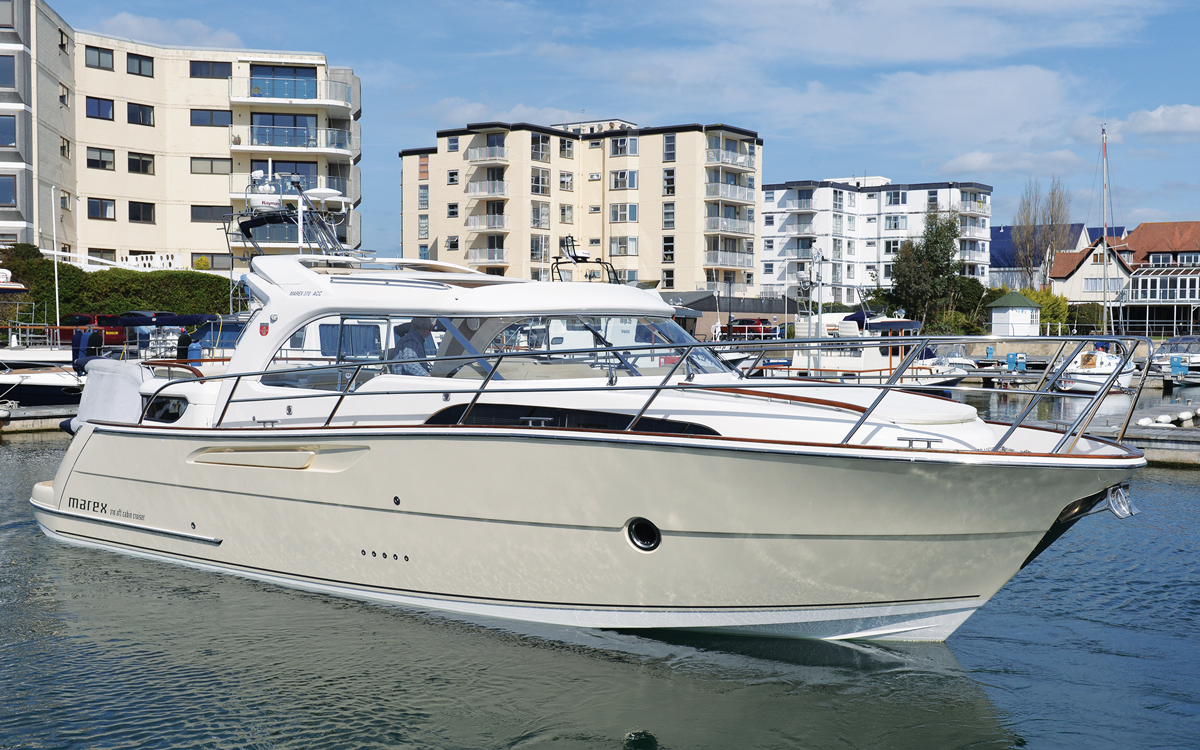 Nick Burnham runs the rule over the Marex 370 ACC, a typically well-designed Scandi cruiser, which makes a compelling proposition on the used boat market

“Ironically, we were at Salterns Marina taking delivery of a new Technohull 888 RIB when we first became aware of the Marex 370 ACC.  As a family we’d been boating for over 30 years but had three years out to see if we missed it. We did, and the Technohull was our route back in.”

Karl Stevestre is explaining to me how the Stevestre family boat turned soon after from the Technohull to a Marex 370 ACC. “UK Marex dealer Wessex Marine had a demonstrator tied up in the berth next to the boat we had bought and it was love at first sight for my father. I had to remind him that we were there to collect the RIB! But we all loved the look of that Marex and a few years later we bought one from Wessex Marine”.

It is indeed a great looking boat. Launched in 2009 and designed by Espen Aalrud, it has the kind of effortless, timeless lines that could as easily be a product of today as of the noughties. The largest boat that the family-owned business had ever built (it’s still run by the two sons of the founder), it is shot through with the kind of practicality, quality and clever thinking we’ve come to expect from small Norwegian boat building companies.

The practical thinking starts the moment you step onto the wide bathing platform and find a bench seat that conceals a very useful deck locker. In fact, all of the decks are well laid out, side decks are wide and bulwarked, pulpit rails high and sturdy and there are plenty of grab rails just where they’re needed. But to really get the measure of this boat you need to head along the sunken walkway past the raised aft sunpad and step into the cockpit.

In typical Scandinavian style, almost all of life takes place here during the day. Protected by a standard fit, open-backed hardtop, it’s where you drive from, socialise, cook and eat. The helm is forward to starboard ahead of a well equipped galley with a gas hob and proper cooker, opposite is the large C-shaped dinette around a folding table.

Read our full used boat review of the Marex 2370 ACC in the July 2019 edition of Motor Boat & Yachting.

The innovative Jeanneau NC11 was built with practicality and usability in mind; Nick Burnham discovers how it stacks up as