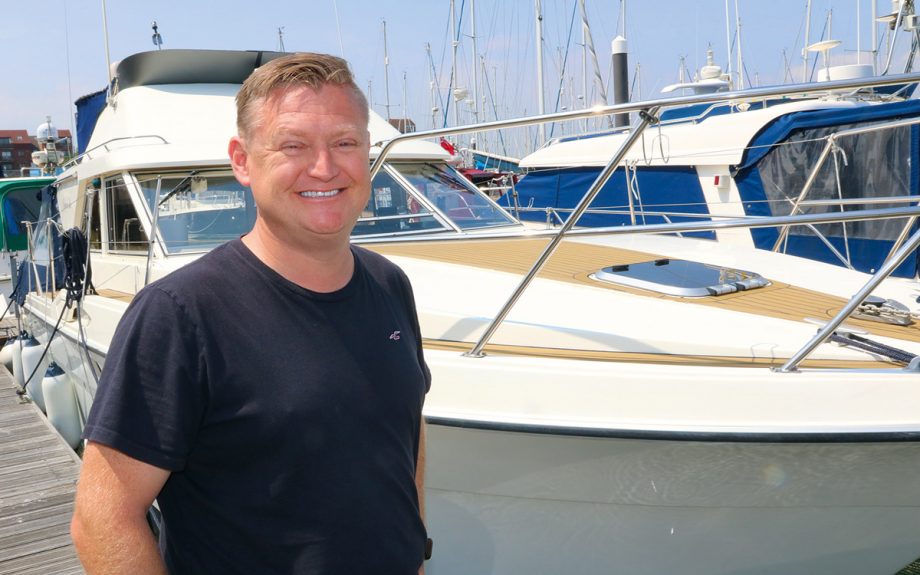 How do you turn a neglected 1980s Fairline Corniche 31 into a bright and modern family cruiser for less than £10,000? Former naval engineer and eBay fanatic Ross Barrett shares his story...

When I stop and think, “when did my boating life begin?”, it always makes me smile. My earliest memory dates back to when I was on holiday as a child in Mallorca watching a family eat pasta on the back of a motor cruiser as the sun went down.

Somehow that vision etched itself into my brain as my idea of holiday heaven and it’s a dream I have clung to ever since. When my dad bought a little fishing boat a few years later it only served to stoke the flames, as did a couple of weeks’ work experience at Northney Marina when I was 15, helping to clean, refuel and move boats around.

These early boating experiences helped steer me towards a career as a mechanical engineer, working for the Ministry of Defence at a Portsmouth naval base.

Being involved with ships and living close to the sea helped keep the dream alive of one day being able to own my own boat but it wasn’t until I returned from a four-year stint working in the Middle East that I decided it was time to take that first step.

We’d only recently bought a house so my wife wasn’t entirely thrilled at the prospect of me spending more money on a boat so we compromised and bought a 3.2m inflatable dinghy with a 3hp outboard on the back.

It wasn’t quite what I had in mind but at least it got us afloat. It was great fun and we spent a lot of time pottering up and down the Hamble. But I kept looking at all the people having fun on their larger cruising boats, wishing it were me.

Eventually, I managed to save up enough money to buy something bigger and in 2015, at the age of 35, I went in search of my first proper boat. I settled on a 1999 26ft Sea Ray Sundancer which I managed to negotiate down to £18,000.

I remember staring across the bow wondering how I was going to helm such a large boat. Needless to say I soon got used to it and loved the freedom it gave us. Weekends and day trips were incredible, which only fuelled my desire to cruise further afield and stay on board for longer periods.

We now had a young daughter as well as an older son so space was tight and it soon became evident that we needed a larger vessel.

An evening with friends aboard a Fairline Targa 34 with its comfortable cabins, proper shower compartment and big galley really brought home what we were missing. I went to the Southampton boat show to get a feel for the size and style of boat we were looking for.

It was an eye-opening experience but also left me thinking that either I needed to win the lottery or find a smarter way of making
my dream come true. Given that the odds of the former were 1 in 45 million, I decided to go with the latter.

To read the full story of Ross’s Fairline Corniche 31 refit, pick up the October issue of MBY, which is out now.