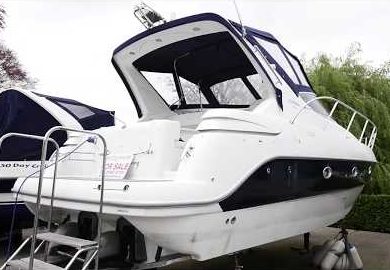 In the late 1990s, Bates Wharf were dealers for Bayliner and Chris Craft. The Sessa marque was to carry them over the six-figure boat price threshold for the first time.

“The Sessa Oyster 34 had just been launched (in 1998) when we got involved. The C35 that replaced it in 2005 was essentially the same boat, but the hull and deck mouldings had been lengthened slightly in the bathing platform, hence the 35 designation,” says Richard Bates.

“When we started selling them, the list price was £99,000. I recall the excitement of selling the first one as its optional extras took the invoice cost over £100,000 – the first time we’d sold a boat that expensive.”

The Sessa C42 marks the welcome return of the Italian yard after a period of uncertainty. Jack Haines puts it

The cockpit of the Sessa C35 we’re on is entirely conventional; indeed, the layout is virtually a carbon copy of those competitors Richard mentioned from Fairline and Cranchi.

It’s easy to see why he felt it would offer strong competition. A large dinette wraps around the port side of the back half of the cockpit opposite a small wet bar, the forward section a single step up (to provide more headroom in the mid cabin) with an L-shaped seat to port alongside the helm position.

One neat detail is a section of cockpit sole that lifts to create easy access to the engine space for daily checks without disturbing the seating, yet hydraulic rams mean that a far larger section opens for more in-depth maintenance, taking the seating with it. Richard points out the sculpted helm with inset dials. “Sessa was fitting smart moulded dash layouts long before the others.”

Later Sessa C35 cockpits were visually uplifted with cream upholstery and bronze-coloured dashboards (the latter looking better than they sound).

Down below it’s a similar story, the layout following the standard pattern for a mid-30ft sportscruiser, with its master cabin forward, a double berth mid cabin aft, and a saloon and galley splitting the two.

A fairly spacious heads opposite the dinette has ‘Jack and Jill’ doors to both the saloon and the mid cabin.

Read the full report in the August 2017 issue of MBY.