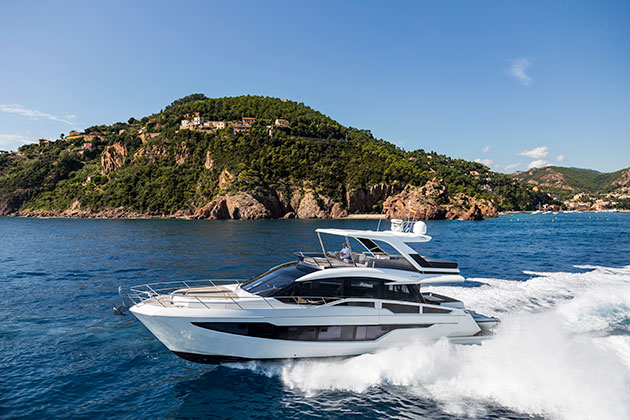 The Galeon 640 Fly has one of the most innovative main decks on the market but does this futuristic flybridge’s talent extend further than that?

The future of motorboats is as much about design innovation as it is technological advances aimed at propelling our boats in greener, more sustainable ways.

The last decade has seen a giant leap forward in what production manufacturers can achieve, meaning the end user gets a boat which, for its size, is more voluminous than ever before and benefits from the sort of gadgetry that used to be available only to those with a berth in Port Hercule.

The Galeon 640 Fly is a prime example. On this boat GRP has all but lost the battle against glass in both the superstructure and the topsides.

Platforms in the cockpit fold down at the touch of a button to significantly boost the amount of space on offer and pressing another button raises a central door in the windscreen, which disappears into the roof, granting access to the most versatile foredeck in the class.

None of this feels like innovation for the sake of it and every one of these features will genuinely improve life on board; it’s a boat where everything does something. No corner is ignored, no space wasted and no opportunity to dazzle dampened.

The folding platforms in the cockpit aren’t unique to the 640 but at this scale they offer a significant amount of additional space which no other manufacturer can match.

Our test boat had fixed L-shaped cockpit seating but there is an option to have seating set on a turntable, which incorporates a tender garage, and swivels the entire unit to face aft overlooking the water.

With the platforms deployed, seating swivelled and hi-lo bathing platform submerged, you have unquestionably the finest aft cockpit in the class.

The foredeck is no less intelligent and it’s boosted by having direct access from the saloon via a sliding panel in the middle of the windscreen.

This is another feature unique to the Galeon and it’s one of these additions that makes you wonder why it’s taken so long for a builder to incorporate it. No doubt it took some chin scratching to get the geometry of stowing a straight piece of glass into a curved molding correct, but they’ve done it and it’s slick.

How reliable the mechanism will be after it’s been opened-closed for the 1,000th time is a different matter but it worked flawlessly after being continuously called into service by a bunch of journalists across two days.

An added benefit is ventilation on the move, especially at displacement speeds where you can drift along with the middle door open to cool the glass-packed saloon without having to fire up the air-conditioning.

There’s more push button wizardry up front where the two sets of seats and tables slide in to create a single sociable dining area or out to make a wide central walkway.

The tables also lower to create a pair of large sunpads while the backrests fold out of sight to improve forward vision underway.

Read the full report in the April 2019 edition of MBY…