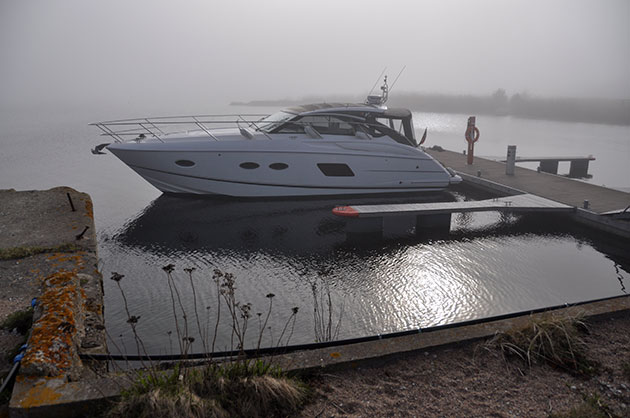 Sunday 29 April: Another early start. I’m getting used to the 4.30am alarm, quick coffee, and under way by 5am. And so grateful for the Eberspächer heating system that I had retro-fitted to Cecienne. I’ve at last mastered the timer and it comes on half an hour before the alarm, taking the edge off the morning chill.

Our biggest concern so far on the trip is fuel. According to the pilot guide there are occasional harbours with diesel available along our course – but will they be open this early in the Baltic season?

Today’s crossing, from Sandvik in Sweden to Roomassaare in Estonia, will stretch our fuel consumption to its limits. We’ve been over the figures time and again, but they don’t look any better. If we can’t get fuel on our first Estonian landfall then we won’t be going any further!

The crossing itself turns out to be like many others of the past few days. A sea mist hems visibility down to a couple of hundred yards, so we run with the radar on for the whole trip. And for well over 100 miles we don’t see a single vessel. We are totally alone on a grey empty sea.

The approach to Roomassaare port is confusing. The chart shows a well marked channel but we can’t find a single buoy – not even a radar contact from one. After hours at sea in the mist we start questioning our instruments – are we really in the right place?

Only the radar picking up the clear outline of a harbour wall reassures us that we were on the right course. Once in port we optimistically moor alongside the diesel pump, but there is no sign of life and not even a contact number.

But yet again luck is on our side; I see a man working on a mast, tell him our problem, and he phones the local petrol station, who it turns out also supply fuel in the port. And although yet again they aren’t scheduled to open for another couple of weeks, someone drives down to bring us our diesel.

While waiting I ask a couple of people who have come to look at Cecienne about the absence of buoys in the channel. There is a logical answer – they are lifted out every year because of the ice. And as we head back to sea, we see the boat actually putting the buoys back in place for the short Baltic summer season.

Our new-found friends also want to know about our plans. When I explain that St. Petersburg is our ultimate destination heads are shaken. “How many guns have you on board?” and when I say none, more shaken heads. “You will need guns. Otherwise you won’t get out of there – they will steal a boat like this one.”

Coupled with the recent deterioration in Anglo-Russian relations and all the stories of St. Petersburg being run by Russian Mafia, this isn’t reassuring to hear.

Read the full story in the April 2019 edition of MBY…