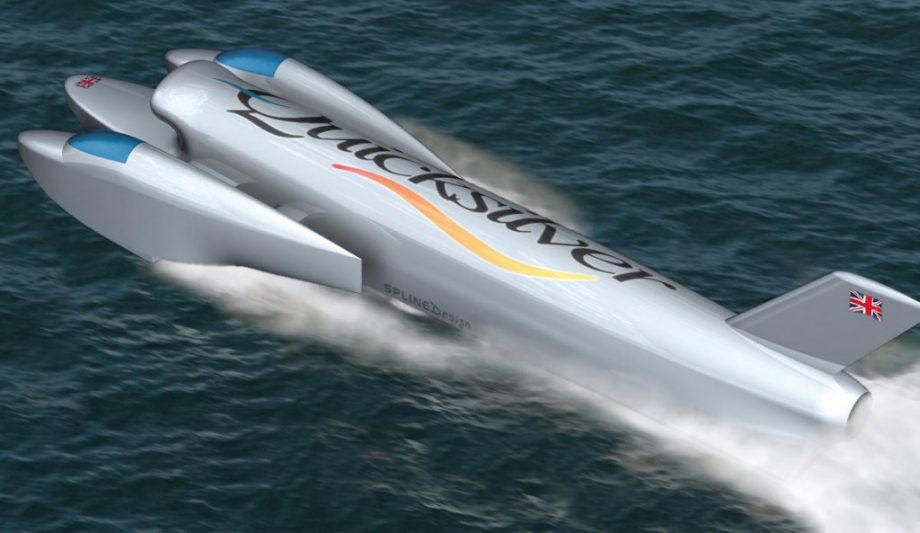 Attempting the world water-speed record takes years of preparation, massive amounts of horsepower, a huge budget, some astonishing engineering, the aerodynamics of a fighter jet and cojones the size of Milford Haven. Despite all this there are currently four active contenders for the title of world’s fastest boat.

Nigel Macknight is both the driving force and the driver of Quicksilver, Britain’s long-standing-challenger for the title of world’s fastest boat.

But despite having worked on the project for the best part of 30 years and surrounding himself with experts from previous land and water-speed record attempts, the team is still some way off staging an attempt on the record itself.

Working with Ken Norris (chief designer of Donald Campbell’s Bluebird K7, which set the water-speed record in 1964) construction of the craft’s steel spaceframe chassis was completed in 2002 and the team installed and fired up a 25,000hp Rolls-Royce Spey jet engine.

All photos courtesy of revocean.org
Campbell’s wife Tonia swims out to greet him after breaking the record on his last attempt. He didn’t even have time to put on his race suit. All photos: James Nicholls / McCormack family album

However, neither the bodywork nor the complex control systems were finalised and the first iteration of the design was shelved following wind tunnel testing that suggested major stability issues.

Since then the team has gone through two further designs before landing on the current twin-cockpit version (pictured above). Concept 4, as it is currently known, sees the engine mounted towards the front of the central hull.

The 25,000hp Rolls-Royce Spey jet engine has since been replaced by a 10,000hp Mk 101 version from a Hawker Siddeley Buccaneer bomber.

This will be mounted into an all-new hull that is being built from kevlar and Baltek, a highly-engineered balsawood material produced by 3A Composites SA of Switzerland.

Once complete, this will be coated in a thin layer of fibreglass before being mounted to the pre-existing steel spaceframe.

Ken Norris is no longer chief designer, but his ideas are being taken forward by Ron Ayers, Lorne Campbell, Mike Green and Roland Snell.

The Quicksilver team say that they will reuse almost all of the hardware acquired for previous iterations of the design, thus speeding up the construction process, but no launch date has yet been set.

Find out more on the official Quicksilver water-speed record website.

Spirit of Australia II recently got a new tailplane. Photo:

As the existing holder of the world water-speed record, straight-talking 82-year-old Australian Ken Warby has nothing to prove. His record of 317.6mph has stood since 1978, but of the four teams currently challenging for the title of world’s fastest boat, his is the only one to have a working boat.

Spirit of Australia II is an updated version of the hydroplane design Ken used to set the original record in 1978, with better aerodynamics and a 9,000hp Westinghouse J-34 jet engine.

It hit the water in December 2004 and in 2007 Ken handed over the reins to his son David, who hit 314kmh (218mph) on a testing run on Blowering Lake in 2018. However, floating debris caused damage to one of the fins and in the subsequent years, the tailplane has also been replaced as well as the engines, which are now Bristol Siddeley Orpheus units.

The Spirit of Australia II team are due to take to the water for further testing later this month with the aim of cracking the 300mph barrier.

“The old boat was never flat out even when I broke the record last time, so the new one will go a whole lot faster,” Warby Sr claims. “The driving is the easy bit. You just sit in it and put your foot down. The trouble is that you’ve only got a 50/50 chance of still being alive at the other end.”

Find out more on the official Warby Motorsport website.

Another British challenger, Jet Hydroplane UK is headed up by David Aldred, who supplied the Orpheus engines for K777, an experimental Bluebird K7 replica that was launched in 2011 and was retired in 2014.

His new project, Longbow is powered by twin Rolls Royce Viper turbojet engines and will be piloted by David-John Gibbs, a Formula 4 powerboat racer and flight examiner at RAF Cranwell.

Far from being threatened by this challenge, David Warby has offered his technical support to the Longbow project.

In the latest update on the Jet Hydroplane UK website, Aldred revealed that the epoxy hull has been faired and Norwegian paint manufacturer Jotun has lent its backing to the project.

Find out more on the official Jet Hydroplane UK website.

Construction of Dartagnan SP600 was completed in October 2016 Photo: Facebook.com/DartagnanSp600

As if this wasn’t enough, there is a fourth project vying to become the world’s fastest boat. Dartagnan SP600 was built by Belgian offshore racer Daniel Dehaemers, who passed away in June 2018.

The project is reportedly due to be revived by his former teammates, so watch this space…