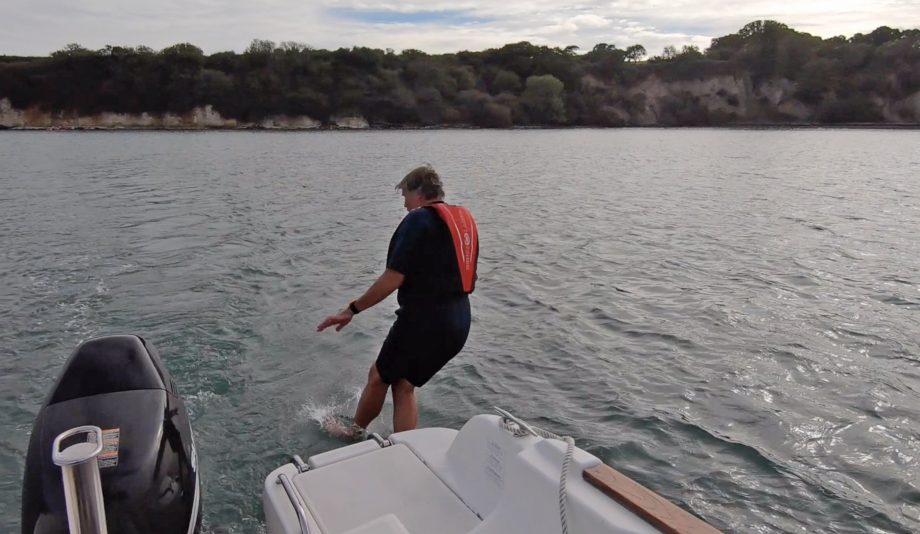 An affordable new wireless kill cord and man overboard alarm could set sportsboat owners free from the helm and improve on-board safety. Jack puts the OLAS Guardian to the test...

Regular readers will know that we are not big fans of killcords. They are a vital piece of safety equipment and work well enough when used correctly but all too often we see or hear of frayed lines, stuck switches and people forgetting to clip on, sometimes with fatal consequences.

Even the most experienced boat users occasionally forget to attach their killcord, usually after moving away from the helm to sort out some other issue like a rope or fender or simply to attend a call of nature. The terrible accident in 2013 in which two members of the same family were killed by their own RIB in Padstow, Cornwall, was a stark reminder of just how easily this can happen.

We’ve been campaigning for a better solution ever since and even had a hand in developing a killcord with a built-in alarm called the Lifecord. But by far the most effective solution that we have tried to date is CoastKey’s wireless killcord system. Unfortunately, it has one major drawback — price. It starts at around €500.

Now a British company has come up with a simpler, more affordable wireless killcord solution that costs just £210 and can be fitted in an hour or two by any competent electrical engineer.

Called OLAS Guardian, it consists of a small battery powered transmitter that the skipper wears round their wrist, a waterproof receiver that is wired into the boat’s kill switch system and a simple panel-mounted control switch for the helm itself. It can also be linked to a free OLAS app for added functionality, although this is not needed for the core killcord function.

The system works by sending a regular stream of low energy Bluetooth transmissions between the personal transmitter and the control box. As soon as this signal is lost, it stops the engine within two seconds.

The personal transmitter has a range of around 50ft, meaning the wearer is free to move around the boat with the engine still running, but as soon as that range is exceeded or the signal is blocked by immersion in water (3-4in deep), the control box kills the engine and sounds an audible alarm. After five seconds the system then resets so the boat can be restarted to assist with any rescue.

In this feature we flesh out the legal requirements, dangers and debates regarding kill cords and how they relate to

If it can’t find it or the transmitter hasn’t been switched on, it sounds an alarm and a red light flashes on the helm unit until a link has been established. In the event of the user not having their personal transmitter with them or its battery failing, you can turn the alarm off and revert to the physical killcord by pressing and holding the dash-mounted button for four seconds.

The transmitter uses a standard CR2477 lithium cell battery that lasts around four months, if left on permanently, and is easily replaced at a cost of around £1.50. There is no auto switch-off facility so users need to remember to turn it off at the end of the day.

The main receiver can be mounted behind the dash

The OLAS app enables a number of other useful functions to be accessed, including a battery condition indicator, a pause button to temporarily switch off the system so you can leave the boat and a solo mode that uses the phone to send an alert and GPS location to a preset contact if the system is triggered.

The reason OLAS has been able to make the Guardian system so affordable is that it piggy-backs on the manufacturer’s existing man overboard technology. The OLAS MOB system uses exactly the same personal transmitters, known as tags, to alert skippers of an MOB situation on any linked smartphones.

These tags are available for just £59 each or £195 for a pack of four and can also be linked to the Guardian system, either for use as additional wireless killcords or simply as MOB devices for other members of the crew. The app will show you how many devices are connected and allow you to select which one(s) trigger the killcord system and/or the MOB alarm.

The Guardian system is designed to work in parallel with the wireless killcord system rather than replace it altogether, even though it can do the job on its own.

As with any device it will only work if used correctly but this does seem to substantially reduce the likelihood of people forgetting to clip on while still giving them the freedom to move around the boat untethered.

For just over £200 that seems a small price to pay for both the convenience and peace of mind it offers.

Buy it now on Amazon (UK)

Buy it now on eBay

Buy it now on Amazon (US)

Buy it now on eBay

First published in the February 2020 edition of Motor Boat & Yachting.