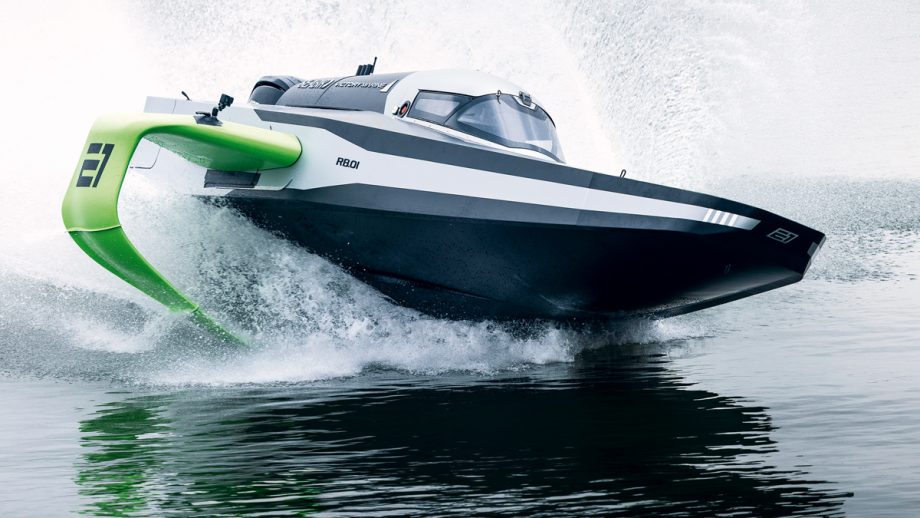 This all-electric one-design foiling boat took to the River Po near San Nazzaro in April, where it was driven by none other than ex-world champion powerboat racer Luca Ferrari.

He put the lightweight flyer through its paces with a series of straight-line speed trials as well as tight, round-the-buoy manoeuvres to simulate actual racing conditions.

The test team also took the opportunity to experiment with the positioning of the onboard cameras that will supply live feeds to a worldwide television audience.

Propelled by an all-new 150kW Mercury Racing electric outboard motor powered by 37kWh Kreisel batteries, this futuristic single-seat racer has a top speed of around 50 knots.

Weighing a mere 900kg, including its pilot, the carbon-fibre craft flies above the water with only the tips of its foils and the propeller submerged, using state-of-the-art trim and steering technology to keep it aloft.

The 1966 edition of the legendary CTC race gets under way in Cowes
Campbell’s wife Tonia swims out to greet him after breaking the record on his last attempt. He didn’t even have time to put on his race suit. All photos: James Nicholls / McCormack family album

The E1 racing championship is due to kick off next year with as many as 12 teams competing. Each race will consist of three 10-12 minute knock-out rounds with teams having to field two pilots of different genders.

The organisers expect to have around 30 identical RaceBirds ready for the start of the season, guaranteeing close racing between the teams. These will be shipped around the world in containers, initially between venues in North America and Europe, although they hope to expand into Asia as well. London, Monaco, Naples and Barcelona have all been mooted as potential venues.

The futuristic looks of the RaceBird were penned by Norwegian industrial designer Sophi Horne from SeaBird Technologies, supported by Italian naval architect Bruno Acampora and Victory Marine, which is building the boats.

Crucially, the E1 racing series has the backing of the UIM, the governing body of powerboat racing, but Spanish entrepreneur, Alejandro Agag, the man behind the popular Formula E Series of electric racing cars, and former aerospace and F1 engineer, Rodi Basso, are the other key players involved.

The Racebird design has been toned down a little from the futuristic vision first shown back in 2020. However, with its long bow, angular foils and super-sleek profile, it still looks unlike anything else on the water. Despite its long, slender profile, the LOA is a mere 7m with a beam of 2m (3m with foils).

Although the new E1 racing series is Seabird’s current priority, it also plans to launch a larger leisure version in the future with space for six passengers and a range of 50nm.

Horne hopes to make these available as both private purchases as well as a network of boat-sharing clubs where people can hire them by the hour or day, with a skipper if needed.