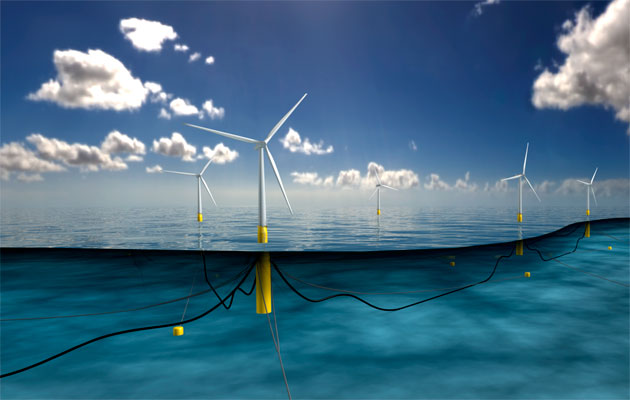 Wind turbines could be heading even further offshore under a new £153m pilot scheme by Norwegian firm Statoil to build the world’s first floating windfarm.

The company, which has more than 40 years’ experience in the offshore sector, has proposed a development called Hywind Scotland. The turbines would be situated 15 miles (25km) off Peterhead in Aberdeenshire.

As the video above shows, the turbines would be ballasted and anchored to the seabed, but would remain floating in 100m deep water in the North Sea.

Irene Rummelhoff, executive vice president for new energy solutions at Statoil, said of the floating windfarm plans: “Our objective with the Hywind pilot park is to demonstrate the feasibility of future commercial, utility-scale floating windfarms.

“This will further increase the global market potential for offshore wind energy, contributing to realising our ambition of profitable growth in renewable energy and other low-carbon solutions.”

Construction is not due to begin until 2017, but the plans have already been granted a marine licence by the Scottish government.

“The ability to leverage existing infrastructure and supply chain capabilities from the offshore oil and gas industry create the ideal conditions to position Scotland as a world leader in floating wind technology.”

Statoil predicts that the Hywind Scotland floating windfarm would generate 135GWh of electricity each year – enough to power 19,900 homes.

The Royal Yachting Association has said that it will be “taking a keen interest in this and other floating offshore wind developments” and has asked the deveoper to release its plans for “operational safety zones”.

It also points out that the Hywind Scotland plans have not received the backing of the Maritime and Coastguard Agency.

In a statement, the RYA adds: “We will continue to work with the maritime community in an effort to limit the impact of offshore wind and tidal developments on the navigational rights and safety of recreational boating.”

The controversial project faced strong opposition from local tourist organisations, MPs and the boating industry, as the nearest turbines would have been situated just 11 miles off the Jurassic Coast.