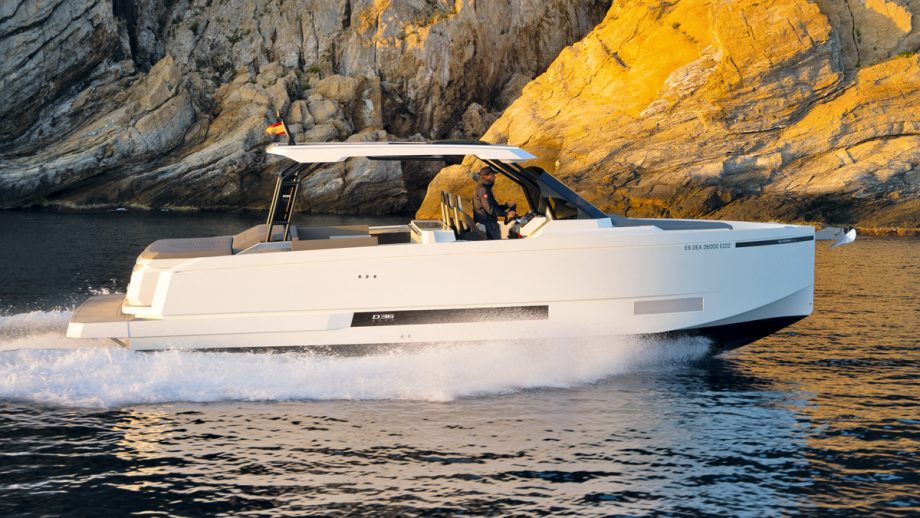 If you’re a day-cruising outboard fan with an appetite for ingenuity, the De Antonio D36 is a boat you need to see. Alex Smith takes a test drive...

Although at the time, it represented the entry point to the fleet, its originality was immediately endearing. It used shapely gunwale-top fenders that doubled as side seats for the central dinette. It used a fulsome beam-forward design for uprated sleeping space, and it positioned a sunbed above the outboard engines for extra day space aft.

It struck me as a brilliant (and brilliantly unusual) way to configure a compact boat, so it’s great to see that at the 2022 Cannes Boat Show, De Antonio’s latest model, the De Antonio D36 Open, continues to ooze originality.

The first and most obvious feature of note involves the carefully considered interplay between propulsion and deck layout. Like a lot of modern boaters, De Antonio values outboard engines for their cleanliness, simplicity, performance and ease of maintenance.

But it also wants to circumvent their limitations, so it has tried to improve security, limit noise and increase the practicality of the boat’s aft end by covering them up with a raised sunpad that backs onto a full-sized swim platform.

The problem then, of course, becomes one of weight distribution. Traditional outboard engines tend to place a lot of weight higher up and further aft than is optimal.

But when you couple that with De Antonio’s additional inboard-style stern structure, which juts out beyond the transom, there’s a clear risk that the De Antonio D36 might struggle to get over its own hump and then porpoise once on the plane.

However, rather than resolve the problem by backtracking with its design, De Antonio has taken things a step further, incorporating catamaran-style hull extensions on either side of those outboards.

The idea is to increase aft buoyancy and drop the nose, while adding some useful extra stability to help mitigate the impact of beam winds and changing or uneven loads.

Read Alex’s full review of the De Antonio D36 in the December issue of MBY, out November 3.