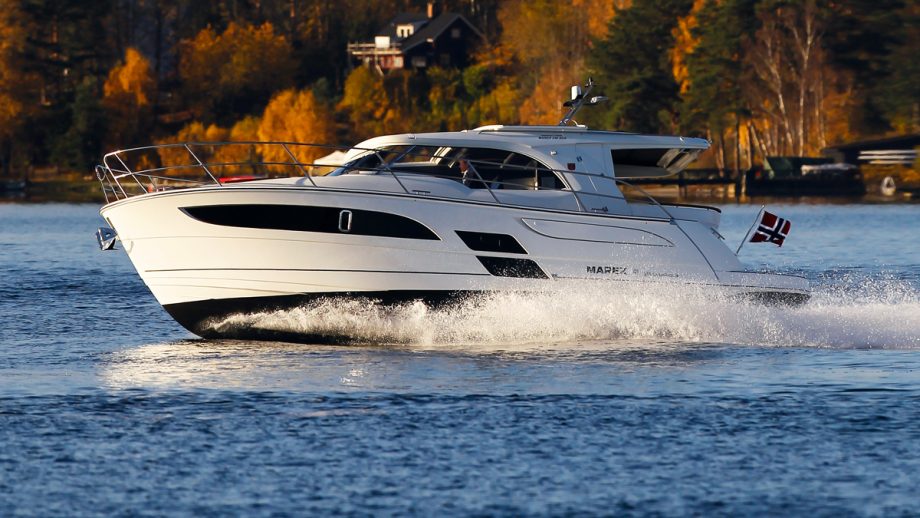 A glorious late autumn day in Oslo allows Jack Haines to put the Marex 330 Scandinavia to the test in the sort of conditions it was designed for...

These occasions are rare but from time to time there are instances where we get to test a boat in the exact environment and conditions that it was designed for.

A late, bright autumn day in Oslo presented such an opportunity for the trial of the highly anticipated Marex 330 Scandinavia, which was launched at the Cannes Boat Show last September.

There, it perhaps appeared a little incongruous rubbing shoulders with the rakish sportscruisers and rows and rows of outboard-powered exotica but lashed to a pier in a windswept corner of central Oslo, with the doors shut and the heating pumping, the Marex 330 Scandinavia is an incredibly enticing proposition.

The yard’s reputation for practicality and attention to detail is second to none in this market but in designing the 330, Marex invited feedback from its network of dealers and, most importantly perhaps, its existing customer base to see what it was they wanted from the next generation of boats.

The result is not only tuned perfectly for its loyal following of owners, but also has broader appeal to anybody who cares about how easy a boat is to use and live with.

Examples of this are varied and plentiful but the most stark demonstration of this is at the helm where a sliding helm door grants excellent access to the starboard side deck directly from the steering wheel.

These boats are often used by a couple and many will be operated by a single-handed skipper, so the ability to relinquish the driving controls and quickly be on deck with a line in your hand is hugely important.

Not only that, on a sub-35ft boat it’s an added benefit to have two access points into the saloon and is another way to draw some natural ventilation into the cabin.

From stem to stern, though, this thing is punctuated with clever ideas that, as Marex likes to say, “make the little things easy”.

Read Jack’s full review of the Marex 330 Scandinavia in the March 2022 issue of MBY, which is out now.