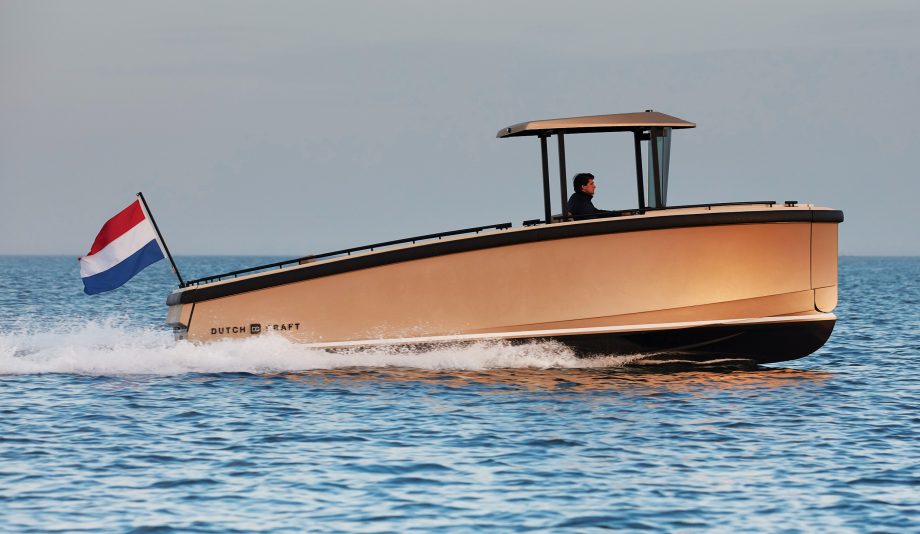 There’s a lot to admire about the DC25. It’s an all-electric 26ft sportsboat with a petrol-rivaling top speed of 32 knots and a decent range – DutchCraft claims to have got 42nm out of it at a constant 32 knots.

The lithium-ion batteries are stowed along the centreline to keep them as low as possible and help maintain stability and a level running trim.

The drivetrain consists of a 135kW electric motor mated to a Mercury Alpha sterndrive for efficient performance and ease of maintenance.

The modular deck design is another neat idea with a flat floor, a folding transom and tracks along each side enabling you to slide in a range of different seats, diving racks or storage units.

It means the DC25 can carry everything from bikes to SUPs and Seabobs as well as multiple passengers. There’s even a drop-down bow door so you can nose up to a beach and disembark guests on to the shore.

Those oddly proportioned looks also serve another purpose, allowing the hard top to cantilever forward and cover the bow while leaving the helm free for a more open driving experience and to lower the air draught when stowed in the garage of superyachts.

That last point also gives a clue to the boat’s target market and helps explain the less good news, namely a starting price of €275,000 before tax.

By normal standards that’s a lot of money for a 26ft dayboat, but for a superyacht tender with an all-electric drivetrain, it’s almost good value.