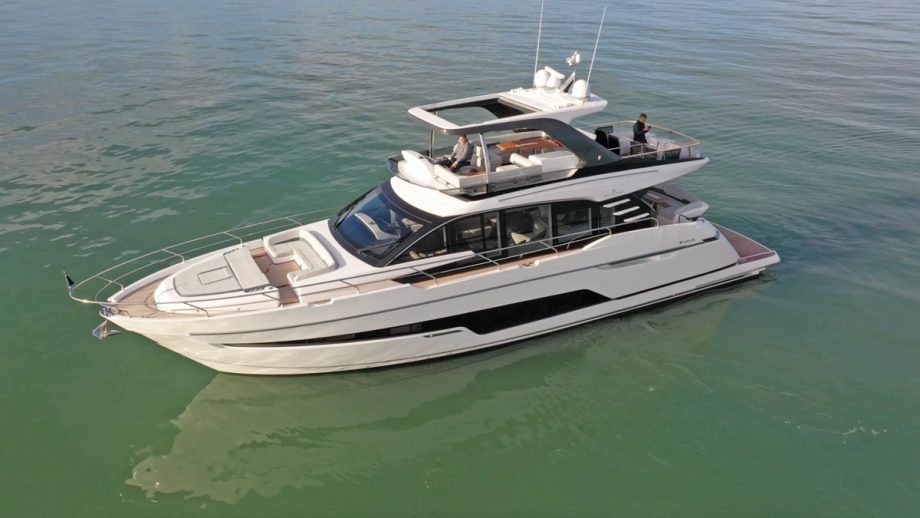 MBY deputy editor Jack Haines takes a test drive of the Fairline Squadron 68, which has been reimagined for 2022…

The Fairline Squadron 68 was launched back in 2019, however in 2022 Fairline have made some significant changes to their flagship flybridge.

These include a redesigned exterior and some big changes on the inside as well, as we recently found out with a full test drive of the 2022 Fairline Squadron.

The most significant change on the outside is the hardtop, which is now much better integrated into the flybridge moulding.

They’ve also changed the sunroof itself, replacing the slatted version with a canvas roof that fully retracts, so you get a much better aperture.

There are some tweaks to the window line, making the styling on the topsides is a little bit different, but one key feature they’ve added is a side door on the starboard side deck.

This means that you can ventilate the helm really easily, but it also means that those at the helm can get out onto deck far more easily than having to walk out the back door and up onto the side deck.

Other key features include a high-low bathing platform with a 500kg capacity, so you can carry a Williams 345 as a tender.

Update: The updated version of the Fairline Squadron 68 is due to go on display at the 2022 Southampton Boat Show.