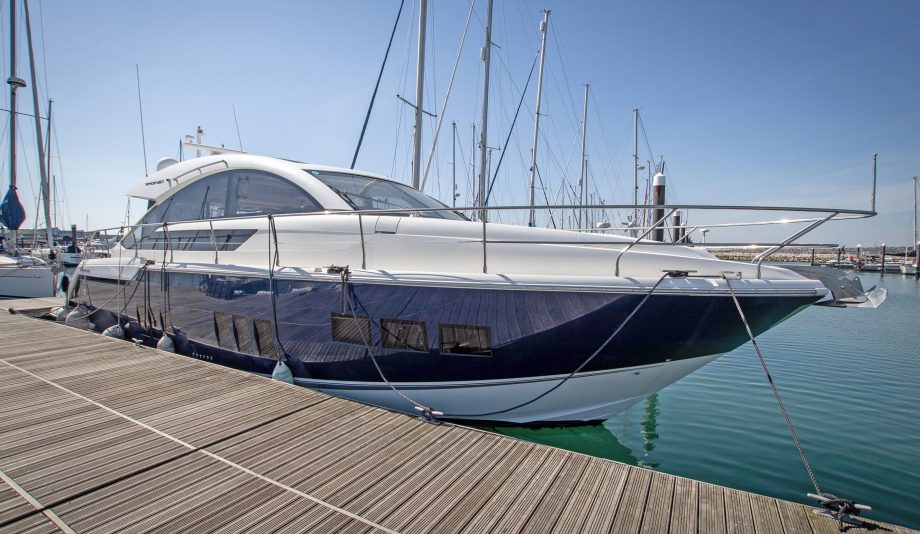 Our resident used boat expert Dave Marsh explains how to find a good Fairline Targa 50GT on the secondhand market.

Outside the world of exotic one-off design, it’s nigh-on impossible for designers of mainstream production powerboats to stray far beyond the norms and fundamentally rethink the underpinnings of a new boat.

But in 2011, Fairline’s designers did just that. In doing so they were able to conjure a 50-foot sportscruiser that was genuinely different.

Back then, sizeable tenders had become a must-have, and high-low bathing platforms were all the rage, typically poking out four or five feet beyond the boat proper.

Fairline’s designers reimagined that orthodox arrangement, and instead engineered an integral tender launch mechanism that cantilevered out from its flush location, hidden within the platform.

That allowed Fairline to extend the hull back to the boat’s rearmost extremity. The effect was transformational – Fairline’s designers suddenly had four or five feet of extra boat to play with.

Which leads us to four space-related reasons why a secondhand Fairline Targa 50GT might be your used sportscruiser of choice. For a 50-footer, the 50GT’s crew cabin is terrific, easy to access, and with its small toilet and handbasin, far more spacious than the lazarette on, say, a Princess V52.

Nor has this compartment stolen any space from the engineroom, which is easy to move around in – not a place where you’ll be obliged to employ a chimpanzee to carry out the servicing or daily checks.

If the high cost of mooring pains you, it’s worth remembering that, because there’s no high-low platform, you would only be paying for a few inches over 50ft, whereas competing three-cabin sportscruisers with similar accommodation and space – even the hugely voluminous craft built today – are likely to be closer to 54ft.

Still, even if the appealing triumvirate of cheap mooring, a great crew cabin, plus a spacious engineroom doesn’t swing it for you, the Fairline Targa 50GT’s trump card possibly will.

In defiance of early 20th century 50ft-plus sportscruiser convention, Fairline sited the owner’s cabin forward instead of amidships. The result is a fabulous owner’s cabin that most 58ft sportscruisers would be hard pressed to emulate.

Read Dave’s full buyer’s guide for the Fairline Targa 50 GT in the August issue of MBY, out July 1.