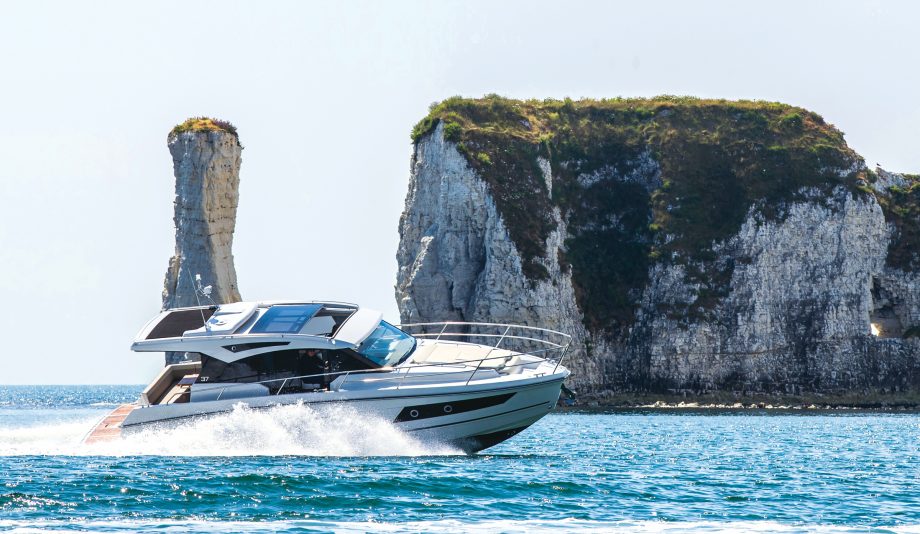 The Grandezza 37CA encompasses the thoughtful design and quality finish we expect from a Finnish boat but a surprise awaits in the way it handles...

During a podcast I was listening to recently, a motoring journalist used a phrase that resonated with me. He described a vehicle that he had reviewed as a “car park car”, meaning before he’d even exited the car park having collected it he could sense that, even at low speed, it was a machine with sound dynamics that might be a bit special.

It’s a feeling I shared as we passed along the marina fairway before our sea trial of the flagship Grandezza 37CA. I had barely even sat inside a Grandezza before testing this one, which was waiting, engines running, before I took to the helm and guided her out of the berth with a few post-lockdown cobwebs lurking in the corner of my brain that deals with boat control.

There is something about the feel of the steering, the action of the throttle in and out of gear and ergonomics of the helm station that inform, even in dead slow ahead, that the Grandezza 37CA possesses something special beneath its functional exterior.

Great attention has been paid to the configuration of the helm to ensure that any skipper, no matter what shape or size, will be able to get comfortable standing and seated.

I spent the majority of the test in the seated position, where the upright chair provides good support and keeps you close enough to the dash to use the major controls and switchgear without having to stretch.

You are plugged into the boat, a feeling enhanced by the chunky steering wheel and damped snick of the throttles as you edge them into drive.

An increase in speed brings with it a greater sense of what this boat might be capable of. With Zipwake’s excellent trim system fitted as standard and Volvo Penta Trim Assist taking care of the angle of the sterndrives there is very little to think about for the person on the helm.

Surge the throttles forward and as a wave of boost shunts the boat towards the horizon the combined electronic brainpower of Zipwake and Volvo will adjust the trim accordingly. Set the cruising speed and let the boat do the rest.

At speed the Grandezza 37CA feels properly alert, alive to even slight adjustments to the wheel and ready to obey inputs from the throttles.

We tested the Sealine C430 in the Solent in irritable Force 3 conditions. Credit: Richard Langdon

The steering is light enough to be whirled about with one hand but the boat doesn’t wander when you want it to maintain a straight course and there is feedback through the wheel when you dial in some hard lock.

It is here where sterndrives are so much more rewarding than pods, which despite being light of steering tend to disconnect you from the action and limit the heel angle which the Grandezza 37CA so relishes.

Throw the wheel in hard and the Grandezza 37CA banks with devilish tenacity, the stern sweeping around in a controlled glide in the manner of a sportsboat half the size.

So fast are the boat’s reactions that in particularly ferocious manoeuvres you can almost feel the electronics trying to keep up with the inertia.

Few owners are ever going to drive their boats as hard as this but it’s reassuring to know that it feels so capable on the limit.

Read our full review of the Grandezza 37CA in the August edition of Motor Boat & Yachting, out July 2.