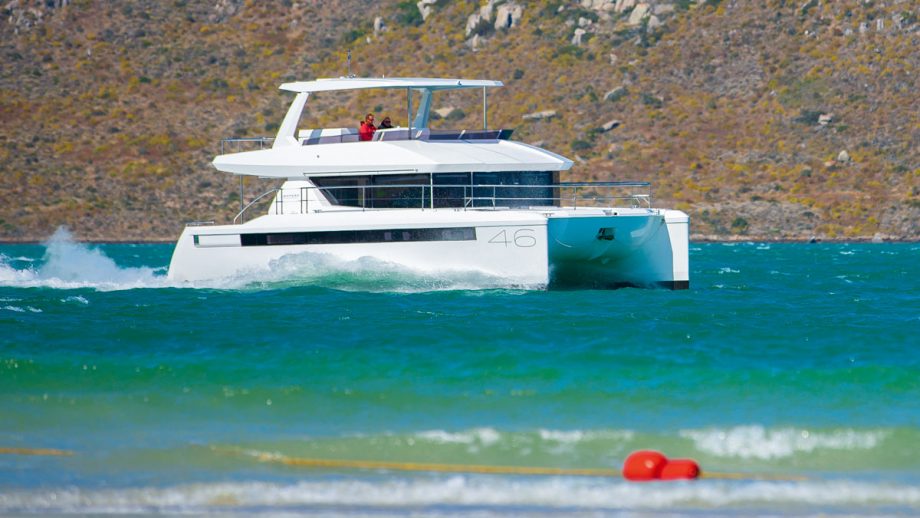 With a robust new hull and improved saloon layout it appears this big cat is capable of changing its proverbial spots. But can it shrug off its charter market heritage?

I don’t usually start a boat test with a history lesson but bear with me, because the Leopard 46 PC is a particularly interesting boat.

For starters it’s one of a new breed of surprisingly fast, stylish and comfortable power catamarans but more importantly, there are several different ways of buying one that could massively reduce the cost of ownership.

But before we get to that you first need to understand the set up behind it. All Leopard catamarans are built in South Africa by a shipyard called Robertson and Caine – the third biggest manufacturer of power and sail catamarans in the world with more than 2,000 craft produced since it was founded in 1991.

However, the Leopard brand is owned by an unrelated company called Travelopia, which buys the entire annual output of the shipyard and has a big say in the development of every new model.

That’s because Travelopia also owns Sunsail and The Moorings, two of the world’s largest bareboat charter operators. Around half the 180 boats it buys from Robertson and Caine each year go straight into the charter fleets with Moorings or Sunsail branding, the other half are sold directly to private owners under the Leopard name.

A wholesale update of the 39PC, the new Leopard 43PC proves itself as one of the best small power catamarans

The boat we are testing is the all-new Leopard 46 PC launched at the recent Miami Boat Show. However, bar a few badges and stripes it is exactly the same as the Moorings 464 PC that will shortly join charter fleets all around the world.

In fact, once a Moorings cat comes off the charter programme, it will be rebranded as a Leopard before being sold on through Travelopia’s brokerage arm.