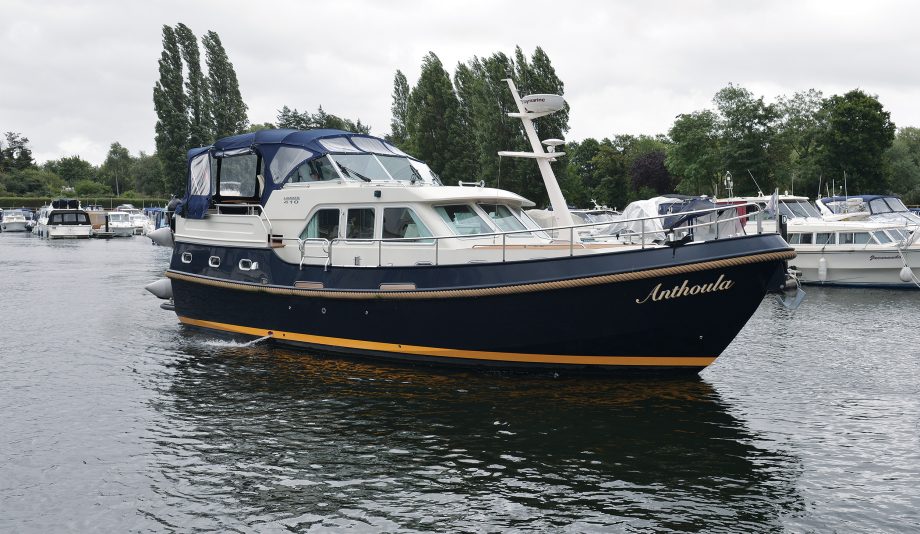 When the Grand Sturdy 410AC was launched in 2001, it was the largest model in the range of venerable Dutch steel boat builder Linssen Yachts. Nick Burnham finds out how it has stood up to the test of time...

“If I can get a serious prospective buyer to the Linssen yard, they will buy a Linssen, it is as profound as that”. I’m sat with Colin Watts at his Boat Showrooms office in Shepperton discussing all things Linssen, and in particular the Grand Sturdy 410 AC berthed directly outside that is the subject of this article.

But to understand the boat, sometimes it helps to understand the builder. Founded in 1949, Linssen Yachts is based in Maasbracht, Holland. Originally set up by Jac Linssen as a small-scale woodwork and ship repair business, it developed into a significant steel yacht building yard with a strong reputation for very high-end cruisers.

Family run from the beginning, it’s now into its third generation, and Colin describes the firm as “meticulous and efficient. We’ve dealt with a few manufacturers, but never one like Linssen. They will give us a delivery slot for a boat a year in advance that is not just a date but a time, and they will deliver on that date, at that time.”

When the Grand Sturdy 410 was launched by the company in 2001, it was the largest in the range. Built in response to demand from owners looking to progress to larger boats, it also created enough space to accommodate a central island double berth in the master cabin aft, rather than a bed pressed up against the cabin side as smaller boats inevitably had.

A traditional-looking steel cruiser, the layout is exactly as you would expect. That full-beam master with its central double bed remains the big news. As well as masses of storage, owners enjoy separate, and generous, ensuite shower and heads compartments.

At the front of the boat (giving terrific privacy) is a forward guest cabin with twin bunk beds. Also forward on the lower deck is a comfortable dinette served by a large L-shaped galley directly opposite. A second toilet and shower is also on this level.

Splitting the two is the saloon area, which on early models also included an inside helm. The vast majority were finished in cherry, although a small number were fitted out with teak.

Aimed very much at the inland cruising market, the deck layout is kept low profile to reduce air draft and help bridge clearance. So the helm is on the aft deck above the master cabin rather than having a flybridge above the saloon that would have increased the height of the boat.

The GS500 is whisper-quiet on the move Credit: Paul Wyeth
Jetten Beach 45

The Jetten Beach 45 was the talk of the town at the Cannes show, but does that fast-displacement hull live

Folding windscreens and mast drop the height still further when required (the latter hydraulically powered as an option). Side decks are wide and low, ideal for the myriad docks and locks that inland boaters are likely to meet.

Read our full used boat report on the Linssen Grand Sturdy 410 AC in the November issue of Motor Boat & Yachting, out October 10.